To Care for the Heart

It is of the greatest sadness that our modern world has come to think of forgiveness in largely forensic, that is legal, terms. Either a person is guilty or innocent. If I have offended a person I ask for forgiveness as though I owed them something and am now asking a boon, a kindness, that I no longer be in their debt.
Archpriest Stephen Freeman | 28 February 2009

Source:  Glory to God for All Things 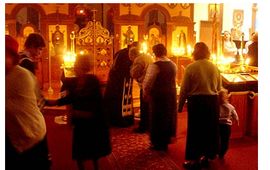 There is a term one runs across frequently, particularly in Russian spiritual writing. It is the word; prelest. I have seen it translated any number of ways – but at its heart it’s meaning is quite simple. It is failing or ceasing to care about the state of one’s spiritual life. It is a sort of lassitutude, as though the spiritual life was of no great import. It could be that we fall into such a state because we have become distracted by other things – or even that we are living in such a state because of personal delusion – that is, not knowing anything about the true nature of the spiritual life.

Thus, continuing to think about forgiveness, I turn also to forgiveness and prelest. It is of the greatest sadness that our modern world has come to think of forgiveness in largely forensic, that is legal, terms. Either a person is guilty or innocent. If I have offended a person I ask for forgiveness as though I owed them something and am now asking a boon, a kindness, that I no longer be in their debt.

Along with the forensic understanding of forgiveness is an inherent set of ideas that belong to the same world. Thus guilt and innocence become important issues for forgiveness. Equally important is punishment and paying for our crimes. This, of course, brings in the entire concept of justice.

Writing as an Orthodox Christian, and anticipating the Sunday of Forgiveness, I tremble at these foreign ideas which have attached themselves to our most holy faith, though they do not have a place in the Church of God, nor in our relationship with Christ.

In general, the concept of justice as we have come to know it, is an inheritance in this part of the world from the Germano-Roman world of late antiquity. The early Germanic tribes (which includes my own English ancestry) had a highly developed since of justice and of how things were to work. The killing of a man, for instance, required that a price be paid, indeed the value of the man. In early Germanic this was known as weregeld, (were being the word for man, and geld, his price). Each person had a geld, depending on age, station in life, gender, etc. Justice was the eradication of such debts. This Germanic understanding was married to the Roman understanding and eventually became the language and world of the Middle Ages, including much of Western Church doctrine. Thus man’s salvation became interpreted in terms of guilt and innocence, punishment and substitution. Forgiveness thus became a transaction – something we do for those who have paid the proper price.

Lost in all of this is the place of forgiveness and the heart. The New Testament parables, such as the Prodigal Son, have no sense of what is owed, of punishment, or restitution. It has only to do with the state of the heart – for it is the heart of man which is in fact the very state of a man’s soul. And it is the heart of man that makes it possible for salvation to be received or causes it to be rejected. This is the consistent teaching of the Church.

Learning to think in the language of the heart – to see that what is important is the state of my heart – and not the balance of payments (if you will) – can be a difficult transition. However, it is utterly necessary if we are to progress in the love of God and man.

You cannot pay your debt. No good deeds are sufficient for such a transaction. And were you to pay your debt – or even if another were to pay it for you – what would the state of your heart be? You indeed, could be a hard-hearted debt-free Christian – but with a hard-heart you would be no closer to salvation than someone whose debt was monumental.

Thus we are told: “Rend your hearts and not your garments!” (Joel 2:13) To become like Christ we are told to forgive even our enemies:

But I say unto you, Love your enemies, bless them that curse you, do good to them that hate you, and pray for them which despitefully use you, and persecute you; That ye may be the children of your Father which is in heaven: for he maketh his sun to rise on the evil and on the good, and sendeth rain on the just and on the unjust (Matthew 5:44-45).

This is a thoroughly consistent teaching of Christ in the Scriptures. It goes to the very state of our heart before God and before man. The transformation of our heart that is required before we truly love our enemies, is the very transformation which unites us with Christ and manifests us as having been conformed to His image. There is no other test for this in Scripture but love of enemy (and friend). Of course, this transformation can only occur through the working of grace within us. But we put prelest behind us when we turn our attention to the heart and see that it is hard and wretched and desperately in need of healing. To ignore this need is to fall back into prelest and to create a distance between our heart and God. In the worst of cases it is to fall into true apostasy.

Some will say, “But what of justice?” What of it? Have you ever seen justice? Have you ever received justice? Of course the state will make some approximate efforts at justice simply for the sake of order – but we should not internalize these matters as though justice had been achieved. God’s justice is beyond our understanding. He pays those who began work at the end of the day as much as those who worked all day. Where is the justice in that? From the Cross He pronounces forgiveness for all. Where is the justice in that?

St. Isaac the Syrian said, “We know nothing of God’s justice, only His mercy.” I suspect that God’s mercy is His justice and that a heart which has been truly transformed into the image of Christ will rejoice at such a prospect.

My prayer for myself and for all, is that come Forgiveness Sunday, I will truly forgive all from my heart and that all will forgive me. And so shall we be in paradise!