Today You Will Be with Me in Paradise 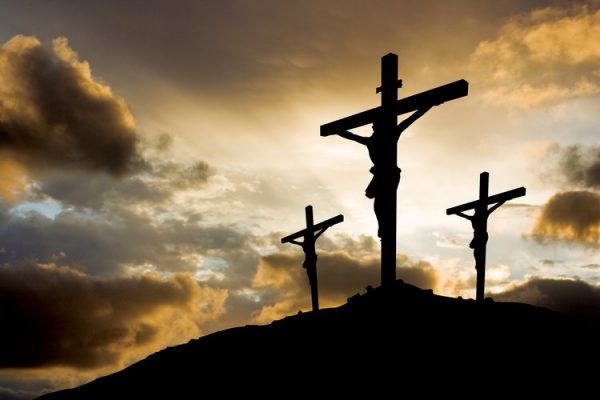 Imagine, it was a criminal!!! Someone being crucified next to Christ, who admitted that he was getting what he deserved. We don’t know his crime. We don’t know much about the man. But we do know that in his last moments of life, this criminal turned to Jesus and after admitting that he was guilty for his crime, he asks in humility and repentance, “Lord, remember me in your kingdom.” And Jesus responded without hesitation, “Today you will be with me in paradise.”

Think about this outrageous response to a criminal. Someone is being punished to death for a crime they admit doing, and yet, Jesus still accepts this person, in his last moment of life, and opens up the gates of paradise for him.

What would we think of that, if we knew someone on death row today being punished for a crime that the law say deserved death, and then we have Jesus saying to them, “Today you will be with me in paradise.”

I don’t think there can be a greater example of the extreme and excessive love and mercy of God! This is who God is. Throughout the Old Testament we hear the description that “God is compassionate and gracious; slow to anger and abundant in loving mercy.”

Let me repeat that so we can focus and truly understand the essence of God – He is compassionate and gracious; slow to anger and abundant in loving mercy!

Saint Paul says it in different words, “God desires everyone to be saved and come to a knowledge of the truth.” (1 Tim 2:4)

Saint John the Evangelist put it this way, “For God so loved the world that he gave his one and only Son that everyone who believes in Him will not perish but will have eternal life. For God did not send his Son into the world to condemn the world, but in order for the world to be saved through him.” (John 3:16-17)

And the Apostle Paul goes on to explain, “God demonstrates His own love toward us, in that while we were still sinners, Christ dies for us… when we were enemies God reconciled us through the death of His Son.” (Romans 5:8,10)

Here we focus on the most fundamental characteristics that describe God – His unconditional love and boundless mercy, for all people, including even those whom the world says deserve imprisonment and death.

Too often, we in the world focus on punishment, on retribution, on what we consider justice. In fact, we put justice far above mercy and love. Maybe that’s why we in the United States now have the largest prison population in the world. We have gone from incarcerating 300,000 people in 1970 to almost 2.3 million of our own citizens today. Imagine, China has four times our population and yet we incarcerate 600,000 more people than they do. In fact, we have almost the equivalent number of prisoners than the next two highest countries, China and Russia combined.

There are so many shocking statistics when it comes to our prison system. Can you believe that more than half a million people sit in county jails without having been convicted of a crime. They’ve been arrested, but simply can’t pay bail as they wait for their trial. The median average bail is $10,000, so these men and women just can sit in prison for months, waiting their trial. Their families left helpless, waiting for their parent to come out and go to trial. Can you believe that half million people are incarcerated for non-violent drug offenses. They may have problems with addiction, but prisons are not the place to help drug addicts find healing. And here’s one more stat – It’s simply shocking to think that one in every 50 Americans is under some type of control by the Correction Industry. One out of 50!!!

We are a society that wants to be tough on crime, and we want to punish those we think deserve it, yet, putting so many people into prison negatively impacts not only the prisoners themselves for the rest of their lives, and this surely includes some who haven’t even committed crimes, but also it severely impacts the lives of the children and families of prisoners. Prison and judicial reform, and a new understanding on punishment, rehabilitation, and restoration are desperately needed in our country.

I bring this all up because our Orthodox Church has designated today as Prison Ministry Awareness Sunday. It is a time when we remember our Lord’s words at the Last Judgment, “I was hungry and you gave me something to eat, I was thirsty and you gave me something to drink, I was a stranger and you invited me in, I needed clothes and you clothed me, I was sick and you looked after me, I was in prison and you came to visit me… Whatever you did to the least of my brothers and sisters, you did to me.”

As Archbishop Mark, the liaison for Orthodox Christian Prison Ministries, stated, “In prison, the simple acts of kindness are magnified: writing a letter to someone in prison, offering a Bible Study in the local jail, making the wife or family member of a prisoner feel welcome in church. These are the acts of proactive mercy our Lord calls us to, and these are some of the ways that our national Orthodox Christian Prison Ministry serve prisoners every day.”

I remember when I went into a prison in Framingham every Monday night for three years, leading a Bible Study to a small group of anywhere from 3 to 10 men. These prisoners were in for all kinds of crimes. One was serving a life sentence without parole. Another ended up serving 25 years before getting out. Others served much shorter times. What I learned during my visits there was that even though these men committed terrible crimes, they were still children of God. The divine image in which they were created may have been hidden, it may have become distorted, it may have been covered up by either the hurt and abuse that they themselves received sometime in their lives, or by the violence and crimes they themselves committed on others, but still there was something good within them. In fact, I discovered and witnessed true beauty.

Metropolitan Anthony Bloom described it this way, “Every one of us is in the image of God, and every one of us is like a damaged icon. But if we were given an icon damaged by time, damaged by circumstances, or desecrated by human hatred, we would treat the icon with reverence, with tenderness, with broken-heartedness. We would not pay attention primarily to the fact that it is damaged, but to the tragedy of its being damaged. We would concentrate on what is left of its beauty, and not on what is lost of its beauty. And this is what we must learn to do with regard to each person as an individual, and this is not always easy. We must learn to look and look until we have seen the underlying beauty in others. Only then can we call out all the beauty that is there.”

Thirty years after befriending one of these prisoners, a man who spent 25 years incarcerated, I still go out to lunch with him from time to time. Even though he’s done his time, society doesn’t want to forget the label they placed on him, and in many ways, they still condemn him. “Once a criminal, always a criminal” some in our society think. Yet, that’s not our Orthodox Christian perspective.

We have a God of unconditional love. We have a God of boundless mercy. And with God’s love and mercy, there is always hope for everyone, hope to restore a damaged, distorted icon back to its original beauty, hope even for the most hardened criminal.

Never forget who the first person was who entered paradise. He was a criminal, being punished by death for the crimes he admitted. And yet, Jesus saw his inner beauty, and when the man asked, “Lord, remember me in your kingdom,” Christ gladly responded, “Today, you will be with me in paradise.”

Janet Hourihan Brooks is an amazing woman. She is the mother of one of my son’s best friends.…