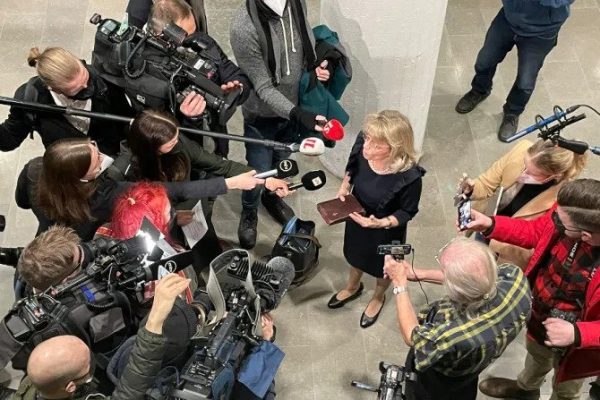 Päivi Räsänen, Finland’s interior minister from 2011 to 2015, speaks to reporters while holding her Bible at Helsinki District Court on Jan. 24, 2022. | ADF International.

On January 24, 2022, the trial of Päivi Räsänen, a member of the country’s Parliament, a former Minister of the Interior of Finland and a mother of five children, who has defended the traditional concept of marriage for many years, began in Finland.

On the first day of the trial, the Finnish politician appeared before the Helsinki District Court along with Bishop Juhana Pohjola of the Evangelical Lutheran Missionary Diocese of Finland, reports the Catholic News Agency.

Päivi Räsänen was charged with three counts for incitement against a minority group, but in fact, for views that reflect the Christian understanding of family and marriage.

Päivi Räsänen was officially charged by the country’s attorney general because of her comments in a 2004 pamphlet, on a TV show in 2018 and in a recent tweet where the politician expressed a traditional Christian view of marriage and personal relationships.

Each of the charges carries two years in prison. The public prosecutor said that Päivi Räsänen’s remarks “could cause intolerance, contempt and hatred towards homosexuals.” The woman herself pleaded not guilty.

As for Bishop Juhana Pohjola, he is being charged for his decision to publish Räsänen’s pamphlet “Male and Female He Created Them: Homosexual Relationships Challenge the Christian Concepts of Humanity.”

When the defendants arrived at the court, they were greeted by supporters holding banners.

Recently the head of the Synodal Department for Church Relations with Society and the Media, Vladimir Legoyda, said that the Russian Orthodox Church is concerned about the situation related to the trial of Päivi Räsänen.