Trinity Sunday: Preaching By Our Lives

The primary and most convincing kind of preaching is that done by the example of our Christian lives. We should be Christians not in name only: we are to demonstrate our fidelity to Christ and His commandments by our entire lives.
Archpriest Boris Stark (+1996) | 03 June 2012

“Blessed art Thou, O Christ our God, Who hast shown forth the fishermen as supremely wise, by sending down upon them the Holy Spirit, and through them didst draw the world into Thy net. O Lover of mankind, glory be to Thee.”

These words of the festal troparion disclose to us the meaning of today’s feast: while being a glorification of the Holy Trinity, it is simultaneously the birthday of the entire Church of Christ.

On the fiftieth day after Pascha, and the tenth day after Christ’s Ascension, was the Jewish feast of Pentecost. It was on this day that the harvest came to an end among the Jews. In celebration of this event, they brought offerings of thanksgiving to God from the fruits of the earth.

This day also commemorated the Lord’s giving of the Law to Moses on Mount Sinai. All pious Jews spent this day in common prayer. The Apostles, fostered by Christ in reverence for the Law, also undoubtedly gathered together in the upper room in Sion, the former site of the Mystical Supper. With them was Mary, the Mother of Jesus.

Since seeing their Teacher on the Mount of Olives, they had already been waiting ten days for the promised Comforter. Then at the third hour, while they were at prayer, a loud noise from heaven like a rushing mighty wind filled the whole house. Cloven tongues of fire appeared to the Apostles and came to rest on each head. They were filled with the Holy Spirit and began to speak in other tongues. Thus does the Evangelist Luke, a participant in the Christian Pentecost, narrate this event. 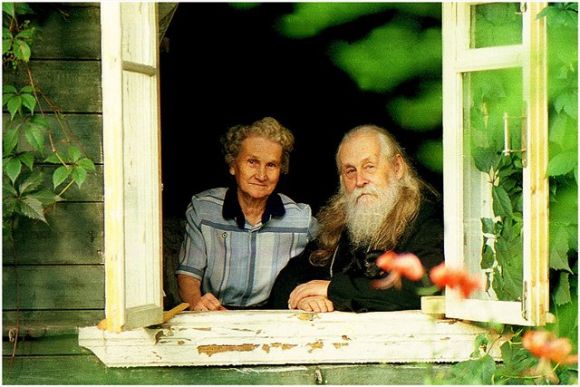 This unusual phenomenon drew a crowd of curious onlookers. The Apostles then left the upper room and began to preach Christ’s teaching, which they themselves had only that day fully grasped. Jerusalem was full of people of different nationalities on that festal day: great was their astonishment when these simple and unlearned fishermen began to speak to each in his own tongue.

Where did their wisdom come from? Who or what remade these simple fishermen into such mighty and wise preachers that, according to the Evangelist’s words, on that day about three thousand souls were added to them and, on the next day – following the preaching of Peter and John – another five thousand came to believe that which only yesterday had seemed like tall tales?

A few weeks earlier Peter, when threatened with suffering, had renounced His beloved Teacher…

And suddenly he finds the boldness to speak openly before a crowd of many thousands, fearing no one and nothing…

Truly, in the words of the troparion, the Lord showed the fishermen to be supremely wise. With the nets of their teaching they began to overcome the world, drawing it into their nets. Now, for nineteen and a half centuries already, this Divine teaching has been spreading throughout the world, abundantly bestowing the grace of God upon every thirsting soul. No obstacle could stem this tide. If this tide has been, as it were, temporarily halted at various points in the history of the Church or in one place or another, this was so that it could later be carried into the world with renewed force.

On this remarkable day, by sending down His Holy Spirit upon the Apostles, Christ established the earthly Church. The Apostles became the unshakeable foundation of this Church; the whole world became the walls of this magnificent Church; and the whole heavenly firmament became its roof.

How else, than by the grace of the Holy Spirit, can one explain how this teaching drew in humanity with such rapidity? Despite the Jewish teachers, scribes, and Pharisees; despite cruel persecution by the Roman Caesars – who saw a threat to their imperial power in the words of these humble fishermen – Christ’s teaching irresistibly drew people’s hearts, even if it had seemed it would not find a response in them. The people of those times awaited the Messiah, a mighty king and earthly savior. But the Christians, in the words of the Apostle Paul, preached Christ crucified: a stumblingblock to the Jews and foolishness to the Greeks, but… God’s strength is made perfect in weakness; that which had seemed beyond the reach of the wise became a mighty armament in the hands of the unlearned, feeble, but pure-hearted fishermen, whose lot was now to be fishers of men.

We, dear brothers and sisters, are members of the victorious Church of Christ, which is for us both a great joy and the meaning of our lives. Yet this places a great responsibility on us.

If the Apostolic preaching of the good news found a response in people’s souls and the Church began to grow inwardly and outwardly and in width and in depth – in depth in the sense of accumulating holiness; in width in the sense of drawing the world into its net – the enemy of Christ began from the very first day to fight against Christ and His Church.

On the one hand, the Roman and Jewish authorities began to persecute the Apostles; on the other, entirely non-Christian deeds began to be performed among the Christians themselves (recall Ananias and Sapphira, who deceived the Apostles; cf. Acts 5:1-10). Later, schisms and heresies arose…

In our days, too, the Church encounters these very same difficulties: on the one hand, misunderstanding and often mockery from those who differ from us; and, on the other, our own unworthy conduct.

After all, we are the heirs of these fishermen. We have a duty to continue their great work today, the work of preaching Christ crucified.

It may well be that today our preaching is a stumblingblock for many and foolishness to others. We believe – we KNOW – that this teaching is sanctified by the grace of the Holy Spirit and that, according to Christ’s own promise, this magnificent temple will stand steadfast to the end of the ages.

Yet simply believing is not enough. We need not only to believe, but also to bear witness. The primary and most convincing kind of preaching is that done by the example of our Christian lives. We should be Christians not in name only: we are to demonstrate our fidelity to Christ and His commandments by our entire lives.

We should keep peace and love in our hearts as the greatest of treasures; we should be imbued with the precepts of the Gospel: to be pure in heart, to be merciful, and to be peacemakers, so that our cleansed hearts might be capable of receiving the grace of the Holy Spirit. For He – Who descended upon the Holy Apostles, granting them strength beyond nature – continues to sanctify the world today: “In the Holy Spirit, every soul is quickened.”

It is up to us, and us alone, whether we will open our souls to the grace-filled breath of the Holy Spirit; whether we will become “supremely wise fishermen.” The Lord is calling us! Can we really not hear His voice? Be that not so!

Let us receive the Lord’s grace with a pure heart so that, as we leave church, we might joyfully cry out with the entire Holy Church: “We have seen the True Light, We have received the Heavenly Spirit. We have found the True Faith. We worship the Indivisible Trinity: for He hath saved us.” Amen.