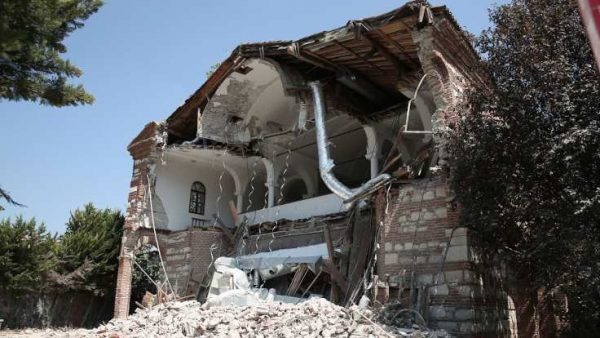 The St. Georgios Greek Orthodox Church, which was restored and transformed into a cultural centre by the Nilüfer Municipality in Bursa, was taken from the municipality and transferred to an Islamic Foundation. The historical building, which was neglected for 7 years, was destroyed last night, Gazete Duvar reported.

The St. Georgios Greek Orthodox Church, which was estimated to have been built in 1896, was converted into a mosque after the exchange, but became abandoned because it was not used after the Yeni Özlüce Mosque was built. The Nilüfer Municipality, which took on the historical building in 2006, restored the building within the scope of the project approved by the Cultural and Natural Heritage Conservation Board and opened it into service as Özlüce Culture House in 2009.

The historical building, whose door was locked after passing to the foundation, was not maintained for years, and cracks began to appear in the building. Noting the situation to the Regional Directorate of Foundations and drawing attention to the danger of demolition, Nilüfer Municipality attempted again in 2016 to control the church and demanded that the building be allocated to the municipality for renovation. However, it was stated that the building cannot be used for any purpose other than a place of worship and that this place was a mosque.

Nilüfer Municipality warned of demolition in 2019 and demanded that the building be rented to the municipality again. However, it was refused. The historical building, left unattended for 7 years, was demolished last night.