Twenty churches to be built on the Kamchatka peninsula 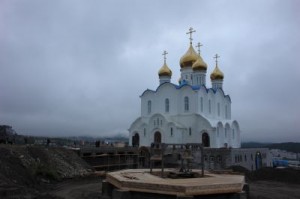 The building of churches in the Kamchatka peninsula in Russia was discussed at the first meeting of the Trustees of the Metropolitan Nestor Fund, whose co-chairman is the head of the region, Vladimir Iliukhin, according to a report on Monday from the press service of the local administration.

“Churches have always been of a special importance for remote northern villages because, even apart from spiritual values, because for the villagers, parishes are often sources of information and culture. In the various local areas churches are in charge of missionary work to this day and head social programs. That’s why there should be churches in each area of the peninsula,” said V. Iliukhin.

The head of the region stressed that the local administration, together with the local diocese, have approved the “Twenty Churches for Kamchatka” program, in accordance with the conditions of the Fund, says Interfax-Religion.

According to the program, twenty churches are to be built on Kamchatka in the coming years—in each local town and also in big cities, so that local residents should have a church within walking distance.

The press service quoted Bishop Artemy of Petropavlovsk and Kamchatka as saying: “If we support people spiritually, then they will have a desire to live, create, and work, and all other issues will be solved more easily.”

It is hoped that a church complex with a rectory and Sunday school will be completed in Palana this year.

“This project is very significant, since Palana is still the center of the Koryak Autonomous Region, and the religious foundation of our north depends on how strong a position Orthodoxy has there. My great hope is that next year we will already be able to start building a church complex and parish school in Tilichiki and in the Penzhina district. In my opinion, the southern part of Petropavlovsk-Kamchatskiy lacks a church. I think in a few years’ time, when we have started rebuilding that part of the town, we will need to set aside a plot of land there to build an Orthodox church,” said V. Iliukhin.

The program is to be implemented with the support of the Fund, which has 28 trustees. They are representatives of government bodies, the diocese and local businessmen.