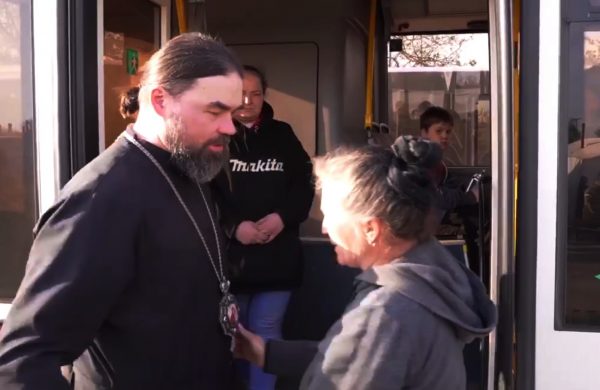 On April 30 and May 1, 2022, two groups of peaceful residents, altogether 101 persons with children among them, were evacuated from the territory of the Azovstal steelworks in Mariupol.

With the blessing of His Holiness Patriarch Kirill of Moscow and All Russia, among those who organized the evacuation of the civilians was Metropolitan Mitrofan of Gorlovka and Slavyansk who was one of the first people to meet them. At first, many of them were afraid of leaving the territory of the plant, but the presence of an Orthodox bishop helped them to overcome there fear: seeing him, they chose evacuation, reports the official website of the Moscow Patriarchate.

“The safe exit from the territory of Azovstal for a part of the civilians who were there is a very important result of the negotiations held with the participation of international organizations”, said in his Telegram-channel the chairman of the Synodal Department for the Church’s Relations with Society and the Mass Media and acting head of the Patriarchal Press Service, Mr. V. P. Legoyda.

He said, “The Russian Orthodox Church also took part earlier in exchanges of captives and other humanitarian actions in that region”.

Thanks to this evacuation, the number of civilians in Azovstal has considerably decreased, although a part of them is remaining in the territory of the plant.