Ukrainian Delegation Visits Chancery of the Orthodox Church in America 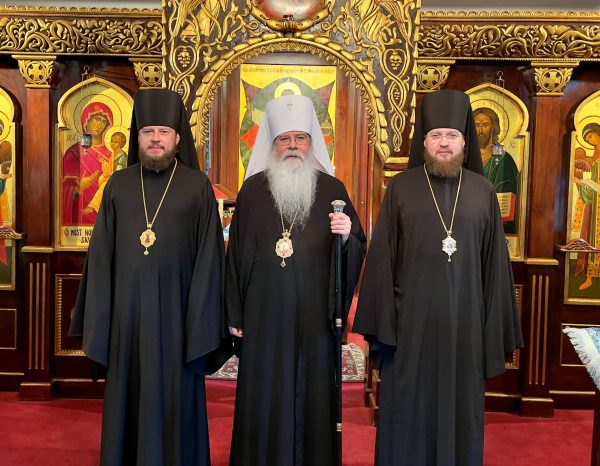 On Wednesday, February 9, 2022, His Beatitude Metropolitan Tikhon welcomed to the Chancery of the Orthodox Church in America a delegation from the Ukrainian Orthodox Church led by His Grace Bishop Viktor of Baryshivka, a vicar of His Beatitude Metropolitan Onuphry, and His Grace Bishop Dionysios Pereyaslav-Khmelnytskyi. The two Hierarchs travelled to the United States two weeks ago for a personal visit.

His Beatitude welcomed the guests to the Saint Sergius Chapel where the Hierarchs were able to venerate the many relics of American and Russian Saints present in the Chapel.

Bishop Viktor and Bishop Dionysios conveyed the brotherly greetings of Metropolitan Onuphry to Metropolitan Tikhon, acknowledging the strong bond that has existed between the two Churches for many years.The two Hierarchs thanked Metropolitan Tikhon for giving his blessing for their visit and taking the time to meet with them.

Metropolitan Tikhon asked them to convey his own greetings to Metropolitan Onuphry and inquired about His Beatitude’s health, especially during the recent difficult times. Bishop Viktor explained the hardships endured by the Ukrainian faithful but also remarked that the Ukrainian Orthodox Church remains strong and faithful by the Grace of God but also through the leadership of Metropolitan Onuphry who offers a constant example of humility, faith, and piety. The bishops also thanked Metropolitan Tikhon and the whole Orthodox Church in America for their prayers and support, especially in the midst of the present challenges.