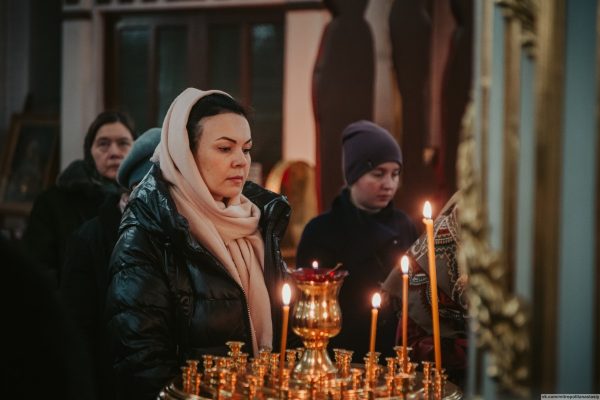 In our world it is quite normal for people to act as if there is no spiritual world or spiritual reality. Even now, we find that the whole world is completely and totally overcome with fear and concern but it is an unbalanced fear and concern. Why? It is a fear for physical health with an almost complete disregard of spiritual health. We focus on the health of the body and we have no thought for the health of the soul. This fear of death becomes a cause for great sin in the whole world. These are not my original thoughts, they are the thoughts of the great Apostle St. Paul who wrote “Since therefore the children share in flesh and blood, He himself likewise partook of the same things, that through death He might destroy the one who has the power of death, that is, the devil, and deliver all those who through fear of death were subject to lifelong slavery.” (Heb 2:14-15)

Fear of death causes us to be enslaved to sin. Fear of death causes us to sin greatly against God and our fellow men. How do we sin against God? We can take the example of our own times. People fear to come to the church because of a fear of catching sickness and dying. This might be a reasonable response for one week or one month but how can we justify this after one year or more? How can we call this place the house of God and then think that we are somehow safer by being away from this holy place where God’s grace is richly present? When we behave this way we lack faith in God and that is a great sin. We also sin when we divide and put ourselves into various camps. We are masked or unmasked, vaxxed or unvaxxed and so forth. No, my brothers and sisters. We are called to be different than the world around us. We will be known by how we love one another and serve one another. When you see someone who is behaving differently or believing differently than you, try to approach that person with humility and gentleness, not judgement and self-righteousness. Otherwise we are no better than the world around us. Without love we have no hope.

Today we see two men who were far from God. In their distancing themselves from God they were unwittingly drawing nearer to the demons and spiritual paralysis and ultimately spiritual death. You cannot remain unaffiliated. Either your life serves God or false gods. In modern times many writers including so-called biblical scholars have understood that the people who are afflicted in the gospel stories do not have demons but some easily explainable medical conditions such as epilepsy or schizophrenia. However this is not true. It is patently false according to the text of the gospels themselves. Either the Lord interacts with demons or he is play acting for the benefit of the observers, simply putting on a show. Of course we know that is not the case.

As we hear in today’s text, the demons are real and powerful. We find two men who are possessed of demons and living in the country of the Gergesenes. The evangelist St. Matthew wants you to know that it is possible not only to be influenced by demons but in fact to be overcome by them. It is possible to lose one’s right might and succumb to the demons. We hear of horrible events in the world and sometimes we wonder how such events are humanly possible, but we remember that there is a hidden and powerful spiritual world. People are influenced and assisted by demons, and not simply by demons but by angels and even the saints of God.

As an Orthodox Christian our health is understood holistically. We should do our best to nurture the physical health while also focusing on our mental health and even more importantly, our spiritual health. St. Paul writes to Timothy “Rather train yourself for godliness; for while bodily training is of some value, godliness is of value in every way, as it holds promise for the present life and also for the life to come. The saying is trustworthy and deserving of full acceptance. For to this end we toil and strive, because we have our hope set on the living God, who is the Savior of all people, especially of those who believe.” (1 Tim 4:7-10)

This is why the Church exists, to be a spiritual hospital. To bind our wounds and offer us medicines for the benefitting of our souls and bodies. And to strengthen us and give us armor to take up the battle against the demonic and evil forces swirling around us. That is our battle and we are at war every day of our lives until God takes us to Himself. And how can we be successful against such fierce and terrible adversaries? Listen to the words of St. Theophan the Recluse,

“You must never be afraid, if you are troubled by a flood of thoughts, that the enemy is too strong against you, that his attacks are never ending, that the war will last for your lifetime, and that you cannot avoid incessant downfalls of all kinds. Know that our enemies, with all their wiles, are in the hands of our divine Commander, our Lord Jesus Christ, for Whose honour and glory you are waging war. Since He himself leads you into battle, He will certainly not suffer your enemies to use violence against you and overcome you, if you do not yourself cross over to their side with your will. He will Himself fight for you and will deliver your enemies into your hands, when He wills and as He wills, as it is written: ‘The Lord thy God walketh in the midst of thy camp, to deliver thee, and to give up thine enemies before thee’ (Deut. xxii, 14).”

This is our battle and the worst thing that we can do if we are serious about the battle is to fear death because it will lead us to neglect God. The Lord reminds us of this when He says “He who seeks to save His life will lose it.” Rather we are encouraged by many of the fathers to fear the judgement of God. Everyone must die, it cannot be avoided, but everyone must also stand before the Lord. How will we stand after this great spiritual battle? Will we stand victorious through Christ or defeated through our self-love and self-reliance?

The answer will depend greatly on whether we trust and love God with our whole heart, soul, mind and strength. If we are present with Christ, Christ will be present with us. If we neglect to open a door in our minds and hearts and lives for the Lord Jesus and His teachings, the door to life will be closed by us. The demons who spoke through the demoniacs believed in Jesus. But they were not faithful to Him. They served themselves rather than serving Him. Take some time each day and try to discern whether you have faith in Christ or are faithful to Christ. There is a big difference between these two. One leads us to life and the other, far from life.

“He who shall preserve the life bestowed upon him, and give thanks to Him Who imparted it, shall receive also length of days forever and ever. But he who shall reject it, and prove himself ungrateful to his Maker, inasmuch as he has been created, and has not recognized Him Who bestowed the gift upon him, deprives himself of the privilege of continuance forever and ever. And, for this reason, the Lord declared to those who showed themselves ungrateful towards Him: ‘If you have not been faithful in that which is little, who will give you that which is great?’ (cf. Lk. 16:11) indicating that those who, in this brief temporal life, have shown themselves ungrateful to Him Who bestowed it, shall justly not receive from Him length of days forever and ever.”

May we show ourselves to be grateful to God and faithful to following His Son so that we might not be slaves of sin but might live forever as Sons of God in Christ. Amen.