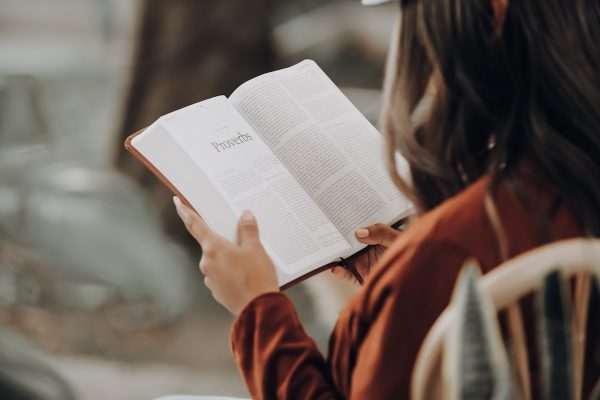 In earlier blog posts we spoke of the challenges to be faced in understanding the Bible in all its rich complexity.  We spoke of the necessity of recognizing that the Bible contains many literary genres and that it is a very old book.  We conclude this series by suggesting that to fully grasp the Bible’s meaning, we need to recognize Christ there when we meet Him—including when His prophetic shadow appears in the Old Testament.

Given the many genres in the Bible, we should expect Christ’s presence there to be varied, and present in many different ways.  Some ways are straightforward:  when Jeremiah prophesies that God would raise up for the House of David a righteous branch, a man who would reign as king, deal wisely, and execute justice and righteousness in the land (Jeremiah 23:5f), we can easily identify this as being fulfilled in Jesus.  When Isaiah prophesies that on the mountain of Zion Yahweh will make a feast for all peoples and destroy the covering of death spread over all nations (Isaiah 25:6f), we can also easily see in this the provision of Christ for all the world when He instituted the Eucharist and destroyed death.  Finding Jesus in the Prophets is comparatively simple. We need to dig more deeply when reading other literary genres.

In the Psalter, for example, we need to remain alert to details in the poetry which found striking similarity in the life of Christ.  When the psalmist describes his feeling of abandonment and persecution by saying that a company of dogs and evildoers surrounded him, that they pierced his hands and his feet, and then despoiled him even of the clothes on his back (Psalm 22:16f) we can see a vivid picture of Christ’s crucifixion—not, of course, that the psalmist suffered crucifixion or even that he was predicting Christ’s crucifixion.  But the poetry of abandonment and suffering contained too many striking coincidences with Christ’s crucifixion to be a true coincidence.

Or take, for another example, the psalmist’s lament of his betrayal by a close friend.  Someone in the psalmist’s life had turned against him.  His friend had shared sacred table fellowship with him on countless occasions, and then lifted up his heel to kick him when he was down (Psalm 41:9).  This fit precisely the betrayal of Christ by Judas, who literally received bread from His hand at the Last Supper and then immediately went out to betray Him (John 13:18, 21f).  Once again, the coincidence is too staggering to be a true coincidence.

Sometimes the realities of our life in Christ are hidden away in historical narratives.  Take for example the story of the Flood.  In this story, Noah and his family (a total of eight persons) come through a flood of water which brings death to the old world of guilt and sin.  When they finally emerged from the Ark, they entered a new world—a world washed clean from sin, a world where they could begin again.  The first thing they did after emerging into this new world was to offer sacrifice (Genesis 8:20).

This is precisely the story of every Christian baptism.  In baptism, we come through the water, leaving our old life of guilt and sin behind.  When we emerge from the water, we enter a new world of righteousness, a life washed clean from sin where we can begin to live again as the children of God.  And the first thing we do after our baptism is to receive the Eucharist, the sacrifice the Church offers to God every Sunday.  There are even other details confirming the presence of Christ’s salvation hidden in this story.  In baptism we are anointed with olive oil so that we receive the Spirit’s blessing—just as the dove (later a symbol of the Holy Spirit) returned with a sprig of olive in its beak.  It is therefore not surprising that as early as the First Epistle of Peter the Church has found in the story of Noah and the floodwaters an image of Christian baptism (1 Peter 3:20f).

We offer one more example:  that of the patriarch Joseph, whose long story is told in Genesis 37-50.  Joseph was the one destined by God to rule over all his brothers.  His brothers, however, were jealous of him and betrayed him.  They disowned him and sold him into slavery.  Yet God was with Him, and He exalted him to a place of sovereign authority in Egypt.  This was, Joseph said, all part of God’s plan to bring life to the world.  His brothers meant their betrayal for evil, but God turned it to good (Genesis 50:20).

In the life of Joseph, we see a foreshadowing of the life of Christ. Christ also was destined to rule over all Israel as the Messiah.  Yet His foes were jealous of His popularity and disowned Him, giving Him up to Pilate for crucifixion.  Nonetheless, God raised Him from the dead and gave Him a place of authority over all the cosmos.  His Jewish brothers meant their betrayal and work for evil, but God turned it to good, so that Christ’s betrayal and death brought life to the world.  Israel, in looking at the life of Christ, could hardly say that God would never allow His Messiah to suffer, for their own history was filled with such examples of righteous suffering—including that of the patriarch Joseph.

The task of finding the footsteps of Jesus throughout the Hebrew Scriptures requires prayerful discernment.  Some of His footprints are easy to see; others need a keener eye.  Ultimately the task of finding the foreshadows belongs not to individuals alone, but to the Church as a whole, for the task of exegesis and interpretation is the work of centuries, as wise men build upon the work of their forefathers.  But the task brings its own reward.  The New Testament looks back to Christ, even as the Old Testament looks ahead to Him.  In all of the Bible, we find the face of Jesus.