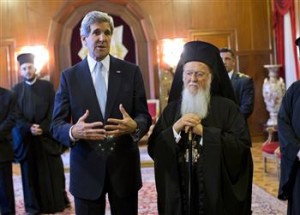 U.S. Secretary of State John Kerry urged Turkey today to re-open Orthodox clergy schools on Heybeliada island near Istanbul that has been kept closed for more than 40 years.

“It is our hope that the Halki seminary will open,” Kerry said during a press conference in Istanbul after two days of talks on the Syrian crisis and the Mideast peace process.

Kerry said he discussed religious freedom in overwhelmingly Muslim Turkey and the possible re-opening of the theological schools in talks with Turkish Foreign Minister Ahmet Davutoglu.

The Halki seminary, where Orthodox clergy used to train, was closed in 1971, after Turkey fell out with Greece over Cyprus.

Kerry also met yesterday Fener Greek Patriarch Bartholomew. As the pressure on Ankara to re-open the seminary is rising the government also says it is also in favor of such a move.