Mr. Stepashin, “The Russian Orthodox Church Together with the Syrian Brothers are Doing Their Best to Save Christians in the Middle East” 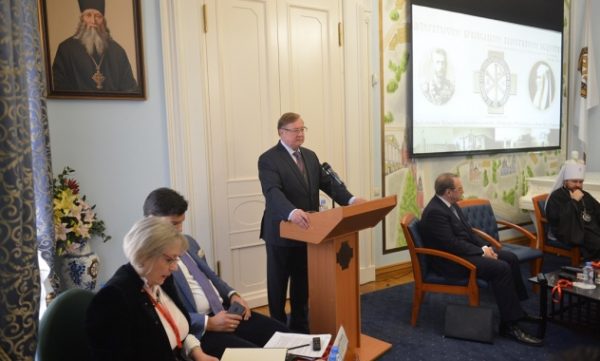 On 1 March 2018, an international round table on the Future of Christianity in the Middle East: Reality and Prognoses took place in Moscow.

The meeting was organized by the Imperial Orthodox Palestine Society (IOPS) and Ss. Cyril and Methodius Theological Institute of Postgraduate Studies. Among those who took part in the round table were Metropolitan Hilarion of Volokolamsk, chairman of the Moscow Patriarchate’s Department for External Church Relations, rector of Ss. Cyril and Methodius Theological Institute; Mr. Sergei Stepashin, IOPS chairman; Mr. Mikhail Bogdanov, Deputy Minister of Foreign Affairs, Special Presidential Representative for the Middle East and Africa; Mr. Mikhail Margelov, Vice-President of the Russian International Affairs Council; as well as representatives of foreign ethnic and religious communities; parliamentarians from the Middle East; and ambassadors of the Syrian Arab Republic, Lebanese Republic, State of Palestine, and the Hashemite Kingdom of Jordan.

Among those in attendance were also Metropolitan Niphon of Philippopolis, representative of the Patriarch of Antioch and All the East to the Patriarch of Moscow and All Russia; Bishop Demetri of Safita (Orthodox Church of Antioch); Archbishop Celestino Migliore, Apostolic Nuncio to Russia; Mufti Albirkhazrat Krganov, chairman of the Spiritual Assembly of Muslims of Russia; Mr. Vadim Kvyatkovsky, vice-chairman of the Synodal Department for Youth Affairs of the Russian Orthodox Church; and Archpriest Dimitry Roschin of the Synodal Department for Church-Society and Media Relations.

In his address, Mr. Sergei Stepashin, chairman of the Imperial Orthodox Palestine Society, said in particular:

“Today the IOPS, Russia’s Ministry of Foreign Affairs and the Russian Orthodox Church, together with the Syrian brothers, are doing all they can to save not only Christians in the Middle East, especially in Syria, but the civilization as well. What was going on and is, regrettably, going on there, endangers the entire world and civilization. In my view, Syria has shown that Christians and representatives of other religions, for instance, Muslims, are working together. There is no interfaith conflict there. The war, the calamity, the terrorism that affect this region unite people, for whom the protection of peace and civilization is not merely a word, rhetoric, fashion, but a real and very serious problem.

Metropolitan Hilarion of Volokolamsk also delivered a presentation, having emphasized the importance of rendering assistance to the suffering Christians in Syria. “At my suggestion, a year ago, during one of the sessions of the Commission for International Cooperation of the Presidential Council for Cooperation with Religious Organizations, an ad-hoc working group was set up, consisting of representatives of religious communities and government agencies,” the DECR chairman said, “This group’s work is aimed at consolidating efforts to render humanitarian support to the civilian population of the Middle East and of Syria and Lebanon in particular. Over the past year, the group held five sessions and sent several consignments of humanitarian aid. A charity event of the largest scale took place in early February.” As the archpastor noted, to implement this humanitarian project, both Christian and Muslim communities combined their efforts.

“Today, when the time has come to think of the revival of the country, the key task for solving the problem of the Syrian refugees and of the re-establishment of the Christian presence and interfaith peace in the country is the restoration of churches and monasteries,” Metropolitan Hilarion added, reminding all those present that a short while ago the first part of a catalogue of Syria’s destroyed churches was presented in Vienna. The catalogue was the result of the intensive work carried out by the Russian Orthodox Church and the Roman Catholic Church with the participation of Kirche in Not Foundation.

“We believe that the participation of religious leaders is essential for the political settlement of the situation in Syria and has a great peace-making potential,” he said, noting that Russia continues to render humanitarian assistance to the civilian population of Syria, including Christians.

Most viewed articles
Hallowed Be Your Name: Some Grammar and A Reflection215
Who Is the Author of Confusion and Fear?175
Church Dating 1,600 Years Back Discovered in Turkey’s Priene Ancient City160
How to Read the Bible101
Seven-day celebrations dedicated to the Saint who helped Bucharest during plague epidemic begin on Thursday82
Holy Intercession Church in Glen Cove, NY, Celebrates its 70th Anniversary70
Patriarch Kirill Encourages the Media to Report Proper and Adequate Information about the Church62
Since the Start of the Pandemic Moscow Priests Have Made Over 4,000 Visits to Patients with COVID-1942
Words from St. Isaac of Syria1
Most popular authors
Archpriest Michael Gillis215
Fr. Stephen Powley175
Pravmir.com team174
Dilan Pamuk160
Archpriest Lawrence Farley101
Aurelian Iftimiu82
Archpriest Stephen Freeman1