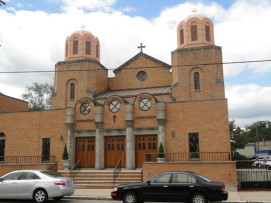 The pastor of a Watertown Greek Orthodox church said he is praying for the thieves who broke into his house of worship, ransacked the office and made off with a safe, gold-plated Bibles and other religious items etched with the names of deceased parishioners.

But he said they’re worth far more in “sentimental value,” as many of the items were donated to the Bigelow Avenue church by families to honor their loved ones.

“These are gospel books, a chalice that are donated in a person’s memory,” Tonias said in a phone interview. “The grandfather, grandmother that are commemorated, many of them have their name inscribed on them. When (families) go to church, they tell their children, ‘That’s in honor of your ‘papou,’ your grandfather.

“The street value is like nil on these things,” Tonias said, adding the bandits may have targeted them simply because “they’re shiny.”

Also taken were a chalice set, gold communion plates inscribed with Greek writing, velvet veils, and even a bookstand, Tonias said. The thieves also took a safe that contained a small amount of “petty cash” from the church office, and destroyed a cabinet that contained it, strewing papers throughout the room, said Watertown police Lt. Michael Lawn.

They got into the church by breaking a window on a boiler room door, Lawn said. A janitor who arrived in the morning first alerted officials.

“That’s what happening out there,” Lawn said, adding he believes that drug-fueled desperation may be behind the theft. “Everyone is stealing gold and cashing it in. They saw the chalices and gold-plated bibles, and grabbed them. It’s pretty desperate when you’re going into the church and stealing things like this.”

While Easter looms on Sunday for many Catholics, Tonias said the Greek Orthodox calendar operates differently, meaning while it’s still the Lenten season, his church won’t celebrate Easter until May 5.

The church has extra gospels on hand to use in services, and Tonias said neighboring churches have also offered a hand in replacing the items. But he said church officials hope the thieves realize “they’re not much value there and drop them some place.”

“The prevalent feeling is sadness,” he said of parishioners. “We pray for everyone, even for the individual who did this, we would pray for them and whatever brought them to this. It’s sad for them as well. No one should be brought to this type of state to come to a place of worship and feel you have to take things.”

Anyone with information is asked to call Watertown detectives at 617-600-1309.