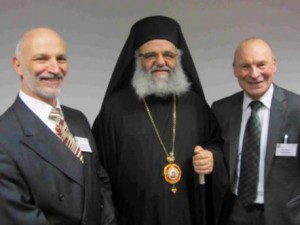 Final planning permission has been submitted for the UK’s first Greek Orthodox school, which is due to open in Brunswick Park later this year.

The first intake of pupils at St Andrew the Apostle School met teachers for the first time during an introduction evening at the school site in the North London Business Park last night.

More than 100 parents and children turned out to hear headteacher Robert Ahearn and heads of departments speak about their plans for the landmark faith school.

Mr Ahearn said: “It is so exciting to see the quality of staff and the way they have spoken really fits in with the ethos of the school we’re looking to create.

“The pieces of the jigsaw are now coming together and by the time we get to September we will be ready to go.

“There is a lot of work to do and not much time to rest but that is all part of the fun – this is an exciting opportunity.”

The building is expected to be officially opened on October 2, ready for the first intake of 150 pupils, of whom at least 50 per cent will be of Christian Greek Orthodox faith, in September.

Chair of governors Yiannis Paveas has been involved in the conception of the school since the idea was first touted more than 18 months ago.

He said: “It is absolutely wonderful to get to this stage and to see everyone coming together and everything gelling is fantastic.

“It is nice we now have some time to get organised before the start of the term. This school is a gift to the community and it has been a huge achievement with everyone working together to get this set up.”