Welcomed or rejected by people, Christ continues to knock patiently at the door of our hearts, Bishop Varlaam says 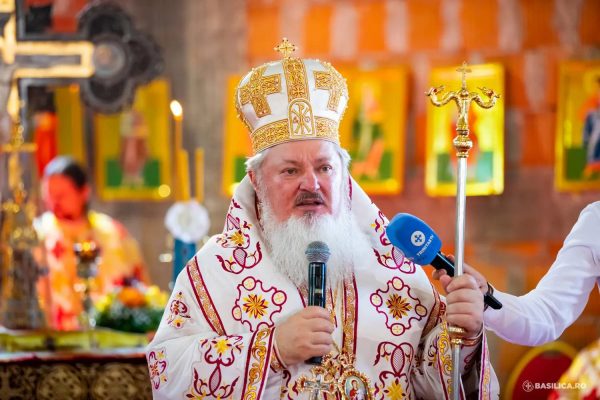 In his sermon on Sunday at the Patriarchal Cathedral, the Patriarchal Auxiliary Bishop Varlaam of Ploiești contrasted the expulsion of the Saviour from Gadara with His warm welcome in Sychar and detailed how these two ways of relating to God have persisted in history until today.

“The city of Gadara came out to meet Jesus in its entirety, unfortunately, not to express gratitude for the healing of the two fellow citizens so badly afflicted, nor to express gratitude that from then on they would be able to walk without fear since the two demoniacs were quiet and with their clothes on. They came to ask Jesus to leave their city because the damage He had done by drowning the two thousand pigs was too great,” said the patriarchal auxiliary bishop referring to the day’s gospel reading.

“We see the contrast between the citizens of Gadara and the Samaritans of Sychar, who, having been told by the woman with whom Jesus spoke at Jacob’s well, went out, the whole city, and called on Jesus to stay in their city. Although Jesus knew about the Samaritans’ hostility against the Jews, He stayed in Sychar for three days, and many of the city inhabitants believed in his divinity and received Him into their lives.”

“Here are two different attitudes: the Gadarenes, who out of greed and the joy of gain and the great loss they suffered drove Jesus out of their borders, and these Samaritans, heretics and full of enmity against the Jews, who nevertheless gladly received Him, obeyed Him, believed and understood that He is truly the Son of God.”

“There have been peoples and individuals, families and cities that have received Jesus, called Him as their Protector, built churches for Him to dwell among them, and there have been individuals and peoples who cast Him out of their midst.”

“We remember Albania – of course, it was not the fault of an entire nation – which was proclaimed by its Communist leaders the first atheist state in the world. We remember the horrors against Christ and His Church in Soviet Russia, where tens of thousands of churches were blown up, set on fire, and millions of Christians were sent to concentration camps or killed for their faith in Christ.”

“We, too, have not been shunned by this danger of atheistic ideology. Even after 1990, when faith became free again, there were various opinions calling for the removal of Christ from the life of our nation, either by removing His icon from schools, public institutions, or by religious education from the public education system etc.”

“But, behold, Christ overcomes all these things and continues to knock at the door of our hearts. He does not force any door. He tells us that ‘no one can come to the Father except through me’ and that I am the door; anyone who enters through Me will find pasture” that is, eternal life.”

“He patiently knocks on our hearts and waits for us to welcome Him into our lives, families and societies, knowing that without Christ, we can do nothing,” the Patriarchal Auxiliary Bishop Varlaam of Ploiești concluded.