More Precious than Pigs and Sparrows 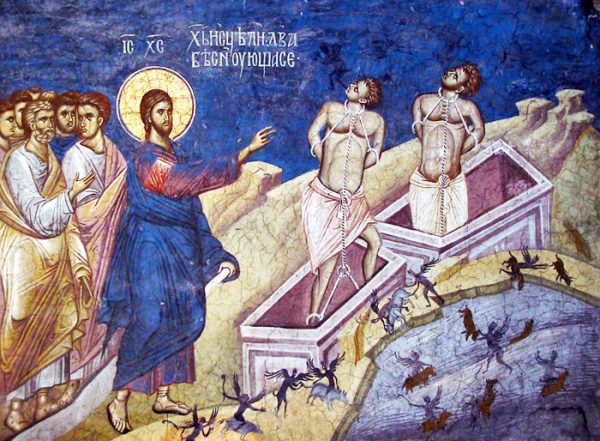 What is the value of human life?  That is the question that we are asked to consider in today’s Gospel reading from St. Matthew.  We see this contrasted by the reaction of the two groups of people who were confronted by Jesus and His disciples as they traveled through the country of the Gadarenes.  Their reaction mirrors many of our attitudes today: One group will want to follow Jesus while the other group will push Him away.  Their decision about what they will do with Jesus depends on how they value the lives of their fellow human beings.

The account of Jesus and the Demoniacs is repeated in all three of the Synaptic Gospels.  In St. Matthew’s telling, there are two men possessed by demons, whereas in Mark’s and Luke’s Gospels, there is only one demoniac mentioned.  The number of men is not important to the lessons that we need to take away from this incident, and there are many lessons to be learned.  But one thing that is consistent in all three accounts is the reactions of the demon possessed men and the townspeople who were told of the demise of the herd of swine.  And what a contrast it is!  While not mentioned in St. Matthew’s telling, Ss. Mark and Luke tell us that after the demons were driven out of the man, he chose to follow Jesus, whereas the townspeople after hearing of the death of the pigs chose to send Jesus away.  The townspeople must have been astonished to see the man who just a little while earlier was totally deranged and a danger to himself and others, now fully dressed, in his right mind and sitting at the feet of Jesus (Mark 5:15; Luke 8:35).

The townspeople had a choice to make: They could praise God for the return of their brothers from the dead, or they could focus on the economic loss due to the death of the pigs.  St. Mark’s Gospel tells us that the herd was 2,000 swine, representing a significant financial loss for the owner.  The people of the town came out in mass, not to praise God but rather to drive Him away from their town.  What were they worried about?  Were there other demons living among these people who, if driven out of their human hosts, would inhabit and destroy other forms of the livestock, costing the town even more in lost wealth?  So, as we can see, the lives of the two men in today’s story did have a price tag, and it appear that Jesus had exceeded that amount.

Whether we realize it or not, we too place a price on a human life every time we encounter another person.  What do we see?  Do we see someone made in the image of God, an icon of Christ in all His glory and perfection?  A priceless brother or sister who is loved by God?  How we see others is often a direct reflection on how we see ourselves.  St. Paul sums up this understanding in his letter to the Romans: “Owe no one anything except to love one another, for he who loves another has fulfilled the law.  For the commandments, ‘You shall not commit adultery,’ ‘You shall not murder,’ ‘You shall not steal,’ ‘You shall not bear false witness,’ ‘You shall not covet,’ and if there is any other commandment, are all summed up in this saying, namely, ‘You shall love your neighbor as yourself’” (Romans 13:8, 9).

If we truly love our neighbor as our self (Lev. 19:18; Matt. 22:39), then we should be able to see our self in our neighbor.  In many cases our neighbor is a mirror of our self, reflecting our own sins.  While we all share the same Heavenly Father, we also share the common human trait of sin.  The townspeople could not see themselves reflected in the demoniacs, but we can all attest to the fact that each of us struggle with our own “demonic possession.”  It may not be as extreme as the two demoniacs experienced from our Gospel lesson, but the level of demonic possession only varies by the impact it has on our life.  If we allow sin—which is a demonic possession since we allow our self to be “owned” or possessed by a sinful demon—to rule our lives then we too will become “dead” to those around us, just as the two men in the Gospel account.

It is interesting that while the townspeople pushed Jesus away, the recovered demoniacs sought to follow Him.  Ss Mark’s and Luke’s accounts tell us that when the townspeople met up with Jesus, they saw the former demoniac “sitting clothed and in his right mind” (Mark 5:15).  For some reason this change in the men brought fear to the townspeople.  St. Luke’s Gospel tells us that when the townspeople saw the former demoniac acting “normal,” they were afraid (Luke 8:35).  But afraid of what?  When the demons possessed that man, he was such a terror that he would be bound by chains to prevent him from hurting anyone.  A naked, chained crazy man living in the tombs outside of the city certainly sounds much scarier than a man clothed and in his right mind.  The townspeople no longer feared the man but now feared the one who had healed him.  Rather than take the opportunity to get some other demon around the town exercised, they chose to send away that one Man who could truly help them.

This unfortunately happens in our world today when people know what they should do to receive the spiritual healing they desperately need but refuse it.  What would we think if someone, knowing he had a serious physical ailment, refused to seek treatment?  We would think that he either had a death wish or maybe was insane.  But what if that same man was suffering from a spiritual ailment and refused to seek help?  Would we say that he had a death wish or was insane?  Most of the time we would allow them to continue to “die” in their sin.  The most we could do is to judge him for his lack of moral strength and condemn him to hell, but certainly not offer prayers for his recovery.  It is again a matter of discerning the value of the human life: Is this sinner worth the cost of my time and effort to help him repent and be saved?

While we may ponder the cost and the return on our investment when it comes to relationships with others, God knows the true value of every human person.  Jesus taught us our true worth: “Are not two sparrows sold for a copper coin? And not one of them falls to the ground apart from your Father’s will. But the very hairs of your head are all numbered. Do not fear therefore; you are of more value than many sparrows” (Matt. 10:29-31).  You are far more valuable to our heavenly Father than either pigs or sparrows.  In God’s eyes, the whole herd of swine could in no way equal the value of a human soul, even if it is possessed by demons.  This is because God can see through the tarnish that we have accumulated on the icon of God that we each possess.  Saint John of Kronstadt reminds us that “the very essence of the person is the image of God, and this remains in him despite every disfigurement.”  No matter how filthy the image of God in us may become, underneath all the grime is still an icon of the Heavenly Father.  In today’s Gospel reading, Jesus was able to see through the distortion and find two souls who were worth saving.

Each human person, even those who have not taken their first breath, are all “of more value than many sparrows.”  But we need to see through the dirt of sin that often obscures that image in our neighbor.  And we, as faithful Christians, must work toward cleaning off the image that we each possess ourselves.  When everyone can finally see beyond the tarnish of sin, then we can begin to truly love one another as Christ command us to do (John 13:34).  Yes, we are all more precious than pigs and sparrows.  Now, let us live as the priceless, precious children of our loving Heavenly Father.