What Do Parents Absolutely Have to Do after Baptizing their Child? 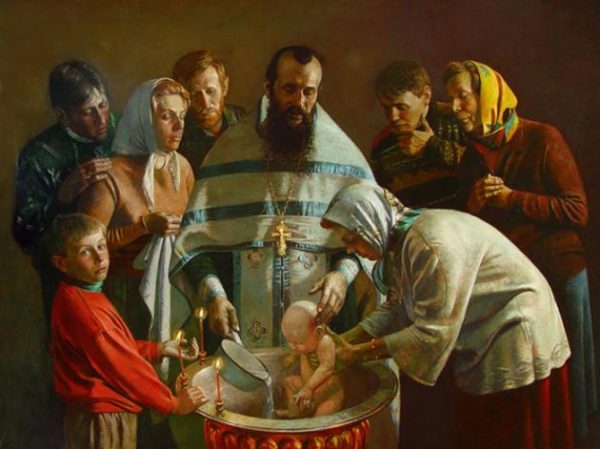 We have baptized the child, glory to God! The necessary minimum has been reached. The obligation before the Lord and before the soul of the child has been fulfilled. Next only earthly things remain: upbringing, health, study, work, army, and marriage. Well, you can also go to church twice a year: to bless cakes, meat and eggs on Pascha and to get holy water on Epiphany. The one who has stronger faith (if, of course, one is not too busy!) will bless a pussy willow on Palm Sunday and apples and grapes on the Feast of the Transfiguration. Well, now that’s definitely enough.

Later, the priest will be called only when the person is dead for the funeral ceremony.

In such person’s mind, Orthodoxy is just an old and dear tradition of their grandmothers. No more. And the whole mysterious salvational life of the Church passes by and is completely invisible to them.

But you need to understand that the Sacrament of Baptism is not the end, but the BEGINNING. This is the door to the enormous and deepest world of the Church: the world of Orthodoxy. I was baptized, and I climbed on the first step of the stairs that lead to heaven. Christ Himself took my hand in His, and instead of leaving me, as if nothing had happened, in the world with its haste, emptiness and passions, the grace of the Holy Spirit received in the baptismal font calls me upward – to the Kingdom of Heaven, step by step, step by step, second by second. Up and up, not down.

The Sacrament of Baptism is not only about great grace, but also about a tremendous responsibility. In Baptism and Anointing, I received a gift, took root in the vine of Christ, connected through God with God the Father, and received the grace of the Holy Spirit for a firm and decisive life in Christianity. I am a new creature, not a decrepit person already, but a renewed earthly angel, a citizen of the Kingdom of Heaven. All sins have been washed away from me, it happened to me here – in the baptismal font – the miracle of my personal resurrection. The birth of a new god-like being – the son or daughter of God – a god with a small letter. This is what the Sacrament of Baptism is.

But instead of trembling with awe and sacred horror before the immeasurable depth of the Sacrament, I perceive it as the purest formality – as a stamp in my passport and go on sinning…

This, my dear brothers and sisters, is the same as putting a holy icon in the mud and trampling it underfoot. After all, what is the Sacrament of Baptism if not the image of God in the heart and soul of man?! And he who does not purify, does not embellish it, does not place it on the throne of his inner heart altar, commits a terrible blasphemous sin.

Because the Lord gave me an enormous gift, and I will be judged and asked: “HOW and WHAT did I use this gift for?”

Now, from the point of view of divine church dispensation (condescension), we receive the great gift of the Sacrament of Baptism just like that. But it was not always like this. Once, many Orthodox Christians were dying for it, but in order to become a Christian, it was necessary to undergo a preparation in order to fully enter into the water and emerge from it as a NEW person in the full consciousness of the Holy Baptism.

The same can be said about godparents. They take a responsibility for the child’s soul. From now on and forever they will be connected with this child by a parental bond: a spiritual invisible bond. Before the Holy See, they swear that they will raise this child in the Orthodox faith. Figuratively speaking, they and this child are like climbers walking in a bundle along the mountain of life. A child will grow up, and might become a bad person and after death will fall, fly down – to hell, and it is quite possible that his or her godparent will follow him/her. Because that is godparents’ neglect. Or, on the contrary, the child will become a good Orthodox Christian and after death will go to heaven, maybe his godparent will also follow him, because that is his godparent’s merit.

Excuses like “I’m already old and live in Ukraine, and my godson is sixty, and rumored to be in Australia” are not accepted. You swore an oath before God for him. As a spiritual parent, you should at least pray for him.

Therefore, parents, both biological and spiritual, should not think after the Sacrament of Baptism: “Phew! It’s finally over, now let’s sit at the table and head home later.” But you have to think: “What is next? How to live now? How to encourage the gift received at Baptism?”

The answer is simple. You should attend the church more often. And live a church life. And then the Lord will guide you.

Mom with a child needs to come to the church after Baptism and conduct a rite of churching. Parents themselves should learn the main prayers, “The Lord’s Prayer” and “The Creed”, and teach their child these prayers. Give him an icon of his heavenly patron saint. It goes without saying that they should pray for their child. It must be remembered that the main shrine of Orthodoxy is the Body and Blood of Christ. And, according to the Savior, “Except ye eat the flesh of the Son of man, and drink his blood, ye have no life in you” (John 6:53). An adult needs a long preparation to take Holy Communion, and a baptized baby can simply be brought to the Chalice, so that he perceives the greatest shrine of the Eucharist. It is very important. The Body and Blood of Christ, accepted by the child, will purify and enlighten him in every way, giving him spiritual and bodily health. Of course, after this you need to read thanksgiving prayers after receiving Holy Communion.

In general, we must strive to visit the church every Sunday with our children, so that the church becomes their native home, not a frightening and strange place. And thus, step by step, they will discover the amazing and deep world of Orthodoxy. Indeed, in essence, the Sacrament of Baptism is only the beginning of a journey. Here you will find a long shining road. Having stepped on it, we will receive such gifts of the Holy Spirit, in front of which all the treasures of the world will fade.

How to Stop Feeling Miserable and Start Being Happy?