Where Does It Say That In The Bible?

Every so often, parishioners ask me faith related questions. Upon providing the answer, sometimes the response is "Where does it say that in the Bible?" This is a welcomed question. Certainly the scriptures are an important part of our faith Tradition and reading the Bible should be a daily part of our prayer routine.
| 31 August 2010 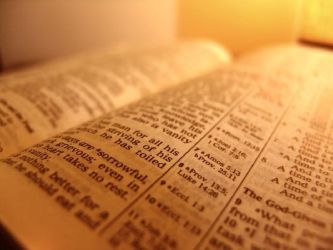 Dear Brothers and Sisters in Christ,

Every so often, parishioners ask me faith related questions. Upon providing the answer, sometimes the response is “Where does it say that in the Bible?” This is a welcomed question. Certainly the scriptures are an important part of our faith Tradition and reading the Bible should be a daily part of our prayer routine. Those asking the question have a desire, or thirst, to know more about their faith and what orthodox Christianity teaches. How, then, does the Orthodox Church view the bible and what is its place in the Church?

The premise that the Church was born out of the Bible and is therefore solely defined by it is false. Why? Because when the Church was first established the New Testament simply did not exist. After the Church was established at Pentecost, the apostles went about evangelizing, they taught people principally through their preaching and teaching, i.e., oral tradition. It is important to keep in mind that the apostles did not sit down right away after Christ’s ascension into heaven and put into writing what Christ said. Instead they devoted their time to evangelizing, baptizing, and teaching new believers, and installing local leaders. In the course of their ministry they wrote letters and later composed the Gospels. This shows that the early Church relied upon the oral teachings (oral Traditions) of the Apostles for their knowledge of Christ. St. Paul in his second letter to the Thessalonians 2:15 states this clearly when he says, “Therefore, brethren, stand fast and hold the traditions which you were taught, whether by word or our epistle.” Hence, the early Christians made no distinction between oral Tradition and Scripture, viewing both as having apostolic authority. The Bible was born out of the living witness of the already established Church, sharing with us the good news of our Lord’s resurrection. Hence the Bible came out of the Church, the Church was not born out of the Bible.

The premise that the Bible is the only record of revelation of God’s truth is false. Why? After the Church was established at Pentecost, immediately the Church began to develop a life of worship. Remember, the first Christians were Jews. These new Christians brought with them their already established Jewish practices of worship. They took what was familiar to them and Christianized their practices. For example, the first part of the Divine Liturgy is the Jewish Synagogue service Christianized. The second part of the service, which specifically focuses on the Eucharist, is uniquely Christian in character and began its development immediately upon the establishment of the Church. Hence, worship and scripture developed in parallel with one another and not independently of each other. This is why there are so many references to liturgical worship in the Bible. Other Traditions were developing in parallel with scripture as well. For example, the first council in Jerusalem met to discuss whether the Jewish converts to Christianity had to follow the Jewish law before becoming Christian (See Acts 15). Guided by the Holy Spirit, many other councils followed. Icons can likewise be dated as early as the first century, for example, the Holy Napkin or the Image “Not Made by Human Hands” which Christ made for King Agbar V of Edessa and the icon of the Theotokos painted by St. Luke the Apostle and Evangelist. Including Holy Scripture, worship, the councils of the Church and iconography along with the writings of the Church Fathers are also vehicles through which God’s truth is revealed.

According to Fr. Ted Stylianopoulos, “…hence there emerged in the Orthodox tradition the position that the Bible is the record of truth, not the truth itself; the record of revelation, not revelation itself. .. This distinction between record and truth carries several important implications … it presupposes that the Orthodox Church highly esteems also other records of the experience of God, such as the writings of the Church Fathers, the [worship of the Church], and the decisions of the Ecumenical Councils. It rescues the [Christian] from an exclusive focus on the Bible … and thus guards [the] Orthodox [Christian] from the error of idolatrous veneration of the text of Scripture (bibliolatry).”

Having said all of the above what is the place of the Bible in the Orthodox Church? Even though the Orthodox Church esteems, in addition to the Bible, other forms of Tradition, this does not mean that the Bible is not important. In fact, the Bible is the primary source of Tradition in the Church. One only need walk into an Orthodox Church, look at the Altar and realize that the Holy Gospels are permanently enthroned on the Altar along with the consecrated Body and Blood of our Lord. The Gospels are enthroned on the Altar because the Bible has a central role in the life of the Church, being seen as an authoritative group of writings that governs the life of all Christians.

Fr. Ted Stylianopoulos writes, “…the Bible is the Word of God: to be read, studied and obeyed. Thus St. John Chrysostom frequently urges Christians to obtain Bibles, to read. them and to engrave the truths of the bible on their minds and hearts. For example he writes: `If now we will thus search the scriptures, exactly and not carelessly, we shall be able to attain to our salvation; if we continually dwell upon them, we shall learn right teaching and a perfect life … For it cannot be that he who speaks with God, and hears God speak, should not profit.’ The above is not an isolated view of a single Church Father. It is representative of the consensus of the great Fathers such as St. Athanasios, St. Basil, St. Gregory Naziazen and others. For them the bible is the primary source of God’s truth and should be closely heeded by all Christians…”

Hence my brothers and sisters in Christ, we must remember that the Bible is the primary source of Tradition of our faith. We should know scripture and study the Bible with diligence that we may be transformed in Christ. However, we do not see the Bible as the only source of Sacred Tradition. It is the primary source of many that weave the whole cloth of the Faith. Our Lord and Savior Jesus Christ has chosen through the power and grace of His all Holy Spirit to reveal and preserve the Tradition “according to Christ” in this blessed way.