Who Am I and Who They Say I Am

Every time a new school year start I cannot but start thinking on the choices one has in education today. The beauty of living in a free country is that one can choose the best-suited education modality for their offspring. Public school is a basic choice opened to all, more refined private schools offer new avenues for the ones that can afford them and for those that don’t trust either, one can also adventure into home schooling. 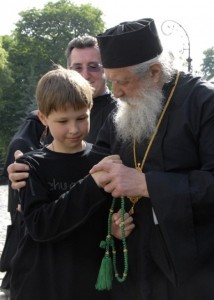 This was not the case back in communist Romania where I grew up. You had to go to the only school system that was and be taught whatever they decided to teach you. There was not much choice involved. Among other things that were taught was compulsory ideological training that was trying to indoctrinate the children with communist ideas. There was a flurry of methods used for this purpose: youth organizations, patriotic hymns, camps, parades, uniforms, just to name a few. The idea was that you are never too young to become a communist. The things went so far that when Stalin died, my mom tells me this story, the teacher ordered all the classroom students to cry.

But no matter how much they tried to brainwash, when you were out of the controlled environment of the classroom, everybody, with a few notable exceptions that always are, were treating this with great superficiality and often even with humor. For the most part the indoctrination was able to reach the masses only a very superficial level.  The main reason was that the theory would not match the practice. Basically communism was teaching equality in theory but in practice some were more equal than others.

Why am I going down this painful memory lane? Because I see today, in a country that is the epitome of freedom to the world, that, in the very name of this freedom, there is a new ideology that is starting to form and the public school systems is the carrier. This new ideology is trying to embody the ideal of being open to all, to make everybody feel welcome and appreciated, to create a world where everyone is accepted. There is nothing wrong with that so far, except that, in practice, while ethnic and racial diversity is encouraged and fostered in public schools, religious diversity is crashed to the ground.  A recent news flash talks about a high school student that was summoned in the principal’s office for reading from the Bible to some fellow students during the lunch break. And this is only one small example of many.

The reason ethnicity and race is fostered is because it is thought to further define who we are.  We are not just Americans, we are also African-Americans, Native-Americans, Greek Americans and so on. The times where people would try to hide their ethnicity and not teach their children their mother tongue are gone. We are proud now also about where we come from and this is all good. But if we are in search for a true identity just naming a country and a race is by far not enough.

What gives me personally an identity is not my affiliation to a racial or ethnic group, but is my allegiance to the Orthodox way of life. You probably noticed I did not say that I am defined by my religion, because my faith as an Orthodox Christian is not in just another way to explain the universe, not just another moral code of conduct, but is a way of living my life that penetrates into the most intimate aspects of it. I cannot be an Orthodox at home and then be a secular person at work, because I will be in the same boat with the communist ideology, which was good only in theory but was vastly different in the real world.

The ideology that the secular society is pushing through school is based on the [false to me] notion that all religions are man made. Once you say this then is easy to say that all religious are equally made-up, it’s therefore part of culture, let’s not fight about them, actually let’s not even talk about them, take them out completely and all will be fine. So when a child reads from the Bible in School, or makes the sign of the cross in the cafeteria, or says Merry Christmas instead of season’s greeting, they are called into the principal’s office as agitators. Where is then the claimed universal acceptance when I am not allowed to be who I am?

As Christians we cannot agree with this attitude. Our faith is not a man made story, but is who we all really are, who all the people are, aware or not of the fact. It is the ultimate reality. We are Christians because Christ is “the way, the truth and the life” (John 14:6). We live like we do because only by following Him we will fulfill our potential as human beings, leaving aside all ethnicity, race or cultural backgrounds. What we believe in is very important and cannot be dismissed because is the motor of all our actions, is what defines us the most. We may nuance it in various cultural and ethnic ways, but these are all just superficial in the end because “there is neither Jew nor Greek, there is neither bond nor free, there is neither male nor female: for ye are all one in Christ Jesus.” (Gal 3:28) We are Christians first and we are struggling to live like ones every minute of our lives.

Do not regard my humble words as more than they are intended: a word of caution for all Christian parents that should know what their children are going through. They are also a warning that oftentimes we might have to supplement [and sometimes even undo] at home and in our churches what the public school system cannot give.

So before you send your kids to school this year take a moment to remind them who they are, children of God in the first place. Encourage them to keep their values intact in a world that will try to dismiss them. And most of all don’t forget to pray that God will open their minds to the true knowledge that only comes from Him. Amen