Whose Righteousness Is It Anyway?

By the way, wanting to be righteous, that is, to obey God, is a good thing; wanting to feel righteous is not a good thing. Wanting other people to approve of us is one of the worst traps we can get in to. For this reason some of the holy monks who are recognized as saints actually lied and claimed to have committed sins they had not in fact committed.
Archpriest Paul Yerger | 07 September 2008 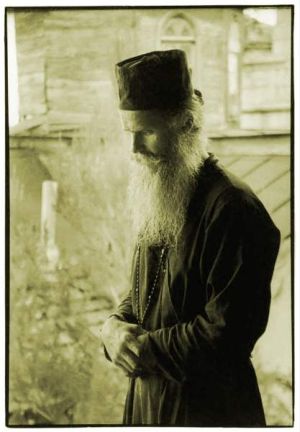 In Romans chapter 10, the Apostle Paul says, For they being ignorant of God’s righteousness, and going about to establish their own righteousness, have not submitted themselves unto the righteousness of God.

We all want to feel righteous, to feel good about ourselves. Even people who reject most traditional morality usually feel “righteous” about something they do and condemn others for doing differently.

Most of us have some concept of what is good and true and right. If so, we will see some inconsistency between what we think is righteous and our own behavior. There are several ways we may try to deal with this.

Obviously we can try to do what we think is right. But we repeatedly fail at it. As the Apostle says earlier in this epistle, For the good that I would I do not: but the evil which I would not, that I do. (Romans 7:19).

The most popular way to deal with this inconsistency is to establish our own righteousness, as the Apostle calls it. We change the definition of “right” so that our conduct fits it. That is, we “change the rules.” We associate this phrase with those who reject traditional moral teachings, but good Orthodox do it all the time. In whatever way we fail to conform to the Gospel or Church practice, we say to ourselves, “this is OK for me because of (whatever we think justifies it).” This reminds us of the lawyer in St.Luke’s Gospel who asked, who is my neighbor? (St. Luke 10:3). He knew that the Law says thou shalt love thy neighbor as thyself (Leviticus 19:18), but he wished to justify himself by limiting the meaning of neighbor so that his conduct would fit the commandment; even sinners love those that love them (St. Luke 6: 32). We may reason, “because this person has done this, I don’t have to love him.”

The Christian way to deal with the disparity between what we know to be right and our own behavior is this: simply admit that we are not righteous, indeed most likely we are not going to be righteous in this world. This can lead to either despair and indifference or repentance. (Even despair can be a good thing if it means despair of being righteous by our own efforts.) But the Christian way is repentance. Repentance means a change (metanoia). Yes, we must try to change our minds, our hearts, our  conduct. But even if we don’t succeed in this, even if we fail again and again, we can be honest about it.

That’s what repentance really is. That’s what Confession is about. It is to be honest and say: “Yes, there really is such a thing as goodness and truth and righteousness and beauty. It is what it is; it’s not up to me to change the definition of it. And my conduct does not conform to it.” Repentance is simply the truth about human life. It opens the door to mercy and forgiveness and even grace to change.

This is what the world calls “hypocrisy.” Whenever anyone speaks of what is good and true, the world wants to point out whatever way he inevitably falls short of it and call him a “hypocrite.” The world thinks it is better to have no ideals than have them and fail. But the real meaning of hypocrisy is pretending; the repentant person makes no claim to be righteous.

By the way, wanting to be righteous, that is, to obey God, is a good thing; wanting to feel righteous is not a good thing. Wanting other people to approve of us is one of the worst traps we can get in to. For this reason some of the holy monks who are recognized as saints actually lied and claimed to have committed sins they had not in fact committed. If they noticed that their brothers had a high opinion of them and considered them holy, they would say, “Pray for me; when I was in the city I fell into fornication,” when in fact they had not done so. They so feared the pride and vanity that might result from being praised by others that they would say anything to avoid it.

As for wanting to establish our own righteousness, in fact there no such thing as our “own righteousness.” The phrase St. Paul uses is idian dikaiosunen. The word idian (one’s own) has the same root from which we get the word “idiot” – it’s idiotic to think we can have a righteousness of our own. God is our righteousness. He goes on to say, For Christ is the end of the law for righteousness to every one that believeth. The “end” (telos) means the Jewish Law is over with; it has been fulfilled in Christ, but telos also means “purpose” – the whole purpose of the Law was to reveal Christ, who is Himself the real law, the real righteousness, the real truth – Christ Jesus, who of God is made unto us wisdom,and righteousness, and sanctification, and redemption: (1 Cor. 1:30). The way to be righteous is to be united to Christ and share His righteousness. We can never be prideful about this righteousness, because it is His and not ours. This is the righteousness we are told to seek: Seek ye first the Kingdom of God, and His Righteousness (not ours) (Matt. 6:33).

Fr. Paul Yerger – based on sermon preached at Holy Resurrection on July 16, 2006. Note: You can hear our Sunday sermons on our web site – www.holyres.net/sermons