Why Is Theophany Important? 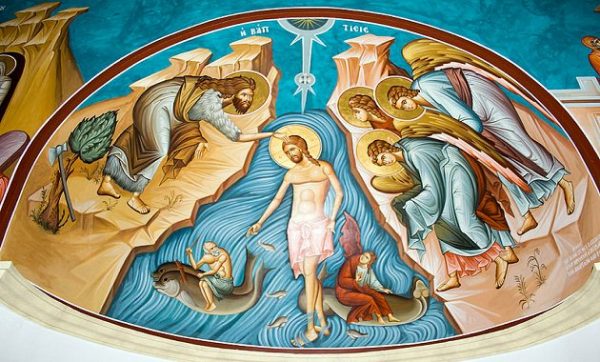 The feast of Theophany (also called Epiphany) is the second greatest feast (after Pascha) in the Christian Calendar. Theophany is even more important than Nativity. In fact, Theophany is the fulfillment of the Nativity. At Christ’s birth, his revelation as the God-man begins. However, this revelation begins slowly, quietly (it had actually begun silently nine months earlier at the Annunciation).

At Christ’s birth, only a few shepherds know what is going on–and an angel had to reveal it to them: “Go into the town” the angel told the shepherds, “and look for a tightly-wrapped baby lying in a feeding trough.” While Jesus was still an infant but after Joseph and Mary had settled in a house, three Wise Men from the East found them; but no one else did. And then the Holy Family left town and lived in Egypt for many years. The manifestation or coming (literally, the “epiphany”) of the Son of God as the Son of Man did not become fully revealed until thirty years later at the baptism of Christ by His cousin John in the Jordan River.

At His baptism, Christ not only fully identifies with our fallen humanity, but he even takes on our repentance. AsSt. Paulsays, “He who knew no sin, became sin for us…” (2 Cor. 5: 21). Although Christ had no sin to repent of, He received the baptism of repentance on behalf of all human beings. So much did Christ identify with humanity, all humanity, that he took on the consequences of sin–himself being completely free from sin–for the sake of all men and women. In Christ everything is fulfilled on behalf of every human being: “all righteousness” is fulfilled, He says to John before His baptism (Matt. 3:15).

At His baptism, Christ not only identifies with our humanity, but He also reveals His divinity. And more than that, for the first time in all the Scriptures, in all of history, the Holy Trinity is clearly revealed: The voice of the Father speaks of the Beloved and Well Pleasing Son while the Spirit descends in the form of a dove. Never before had the mystery of the One God in Three Persons been revealed so clearly. Here at Christ’s baptism the mystery that began to be revealed at his birth is openly manifest to the universe and before the crowds who had come to be baptized by John: the Son of God is the Son of Man.

At His baptism, Christ not only identifies completely with our humanity, but He also begins the transformation of the entire created world. Instead of the water of the Jordan washing away His sin–for He had no sin–the brilliancy of Christ’s divinity and the power of His sinless Humanity began the reversal of the ancient curse. The demonic forces that hid in the water (which in the Old Testament refer to death) and which manipulated the natural world to terrorize lost humanity, these demonic forces were crushed when Christ entered the water of baptism. No longer would the deep, the abyss, or Sheol hold power over mankind: having been baptized in the water, Christ would walk on the water, Christ would pull the sinking Peter from the water: even the watery depths could no longer control mankind, that is mankind in Christ. At Christ’s baptism the ancestral curse begins to reverse.

And after His baptism, having as a man been filled with the Holy Spirit, Christ begins to show the way to triumph over temptation, sin, sickness, religious hypocrisy, political oppression, demonic oppression and eventually even death itself. Christ as a man–without ceasing to be God, but laying aside his prerogatives as God–Christ as a man conquers all human enemies. Christ as a man shows the way for all mankind into theKingdomofGod, intoParadise, into the Resurrection and into Eternal Life.

This is why Theophany is so important. In remembering, in celebrating the baptism of Christ, we call to mind in the most profound way the revelation of the God-man, the washing away of sin through repentance, the reverse of the ancient curse, and the conquering of sin and all of its consequences, even death. The world was enlightened at Christ’s baptism, and when we prayerfully remember it, we come to experience that enlightenment just a little more fully.