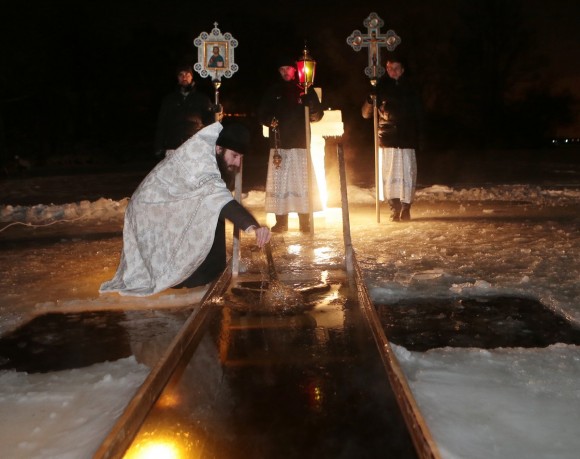 People were leaving their sinful cities–cities full of noise, dirt, passion, intrigue, rat race, lack of meaning and purpose, desperation, disease, poverty, and excess–and walking out to the Jordan River, to the one crying in the wilderness, to be baptized by him, to be washed of their iniquities, to be cleansed of their transgressions in all their sins. They entered the river spotted and blemished with sin, and the waters took their filth upon themselves. If their sins were akin to dry leaves floating on the surface of the river, they would be carried by the current down toward the Dead Sea and mix there with the ancient sins of Sodom and Gomorrah, making the sea even more salty, more bitter, more dead.

When Christ came to be baptized, John, according to the Gospel, was hesitant: “I have need to be baptized of thee, and comest thou to me?” (Matt 3:14) John not only realized that the greater could not receive a blessing from the lesser, but He who Himself is the very “kingdom of heaven which is at hand,” had no need to repent or to confess His sins (cf. 3:2, 6). [1]

Some teach that when Christ insisted on being baptized “for thus it becometh to fulfill all righteousness” (3:15), He acted according to our human nature which He took upon Himself and showed an example to all who would follow Him, to affirm that, although truly God, He was also truly man. [2] Indeed, the righteousness of the Old Covenant is faithfulness to it. Christ came “not to destroy the law, but to fulfill” (5:17)–to fill it with meaning, with purpose, with Himself, to full-fill it in Himself.

In the days of Joshua, when faced with the presence of God, the waters of the Jordan “which came down from above stood and rose up upon an heap very far [off]” (Jos 3:16). “The sea saw [the presence of the Lord], and fled: Jordan was driven back” (Ps 114:3). How could the waters touch Him, who  “placed the sand for the bound of the sea”? (Jer 5:22) How could they dare wash over the One whose name is “the Lord of hosts… the Holy One of Israel” (Isa 47:4)?

But at the moment when Christ entered the waters of the Jordan, according to the tradition of the Church preserved in numerous hymns on the Feast, the river reversed its flow. It is as if Christ pulled back into Himself the bitterness and the salt floating down the river, He took upon Himself “our griefs, and carried our sorrows” (53:4). Like the multitude of fishes that broke Peter’s nets (Luke 5:6), Christ pulled out of the waters of the Jordan a multitude of human sins that He bore on His body all the way up onto the Cross (cf. 1 Peter 2:24).

Perhaps it is not only Christ’s humility at being baptized as a son of man that was well-pleasing to the Father (Matt 3:17), but also His sacrifice at that moment as the Son of God. He bore upon Himself “all their iniquities… and all their transgression in all their sins, putting them upon [His] head” (Lev 16:22, 21). Just as the waters cleansed the people of their sins, they were now themselves cleansed and sanctified by Christ’s taking those sins. And “the next day John seeth Jesus coming unto him and saith, Behold the Lamb of God, which taketh away the sin of the world” (John 1:29)–takes away not by making them magically disappear, but by taking them upon Himself, crucifying them in Himself, and lifting them up onto the Cross with Himself. If we wish to partake of the life in Christ, we must remember that the way to resurrection is not through magic; it is through the Cross. “Therefore we are buried with him by baptism into death: that like as Christ was raised up from the dead by the glory of the Father, even so we also should walk in newness of life.” (Rom 6:4)

Christ is baptized; He comes out of the waters, and carries up the world with Him. He sees the heavens opened that Adam has closed against himself and his descendants. The Spirit bears witness to the Divinity of Christ, for He hastens toward His creation; and a voice sounds from Heaven for it is from Heaven that He has come down to give testimony, and He is the Savior of our souls.

[1] See the beautiful homily on the Feast of Theophany by Saint John Chrysostom.