Source: The Biblical Recorder
Diana Chandler | 19 July 2017
The liberation of Mosul from the Islamic State (IS) does not create an opportunity for most displaced Christians to return home, an Assyrian Christian in the United States advocating for the victims told Baptist Press (BP). 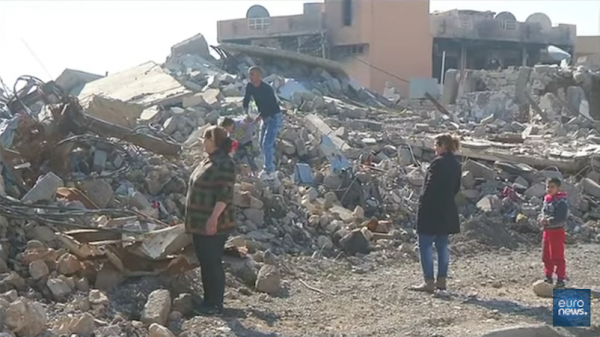 Rather, many displaced Christians see better prospects in establishing their lives in the Nineveh Plains northeast of Mosul, said Juliana Taimoorazy, founder of the Iraqi Christian Relief Council. Based in Glenview, Ill., the council advocates for persecuted Iraqi and Middle Eastern Christians in their homelands and in the U.S.

“The majority of Christians are not seeking to return to Mosul specifically. This is because they were betrayed by their own neighbors,” Taimoorazy told BP. “When [IS] invaded, they asked the neighbors to point out where the Christians are, which is why they marked their homes with the Arabic letter ’N’ for Nazarite, much like the Nazis marked the Jews.

“How can a Christian return to where they were betrayed and trust their neighbor again? This is why they won’t return to Mosul.”

Taimoorazy said sources have reported as few as 10 Christian families were among residents who were unable to escape Mosul and remained under Islamic State rule when it established a so-called caliphate there in 2014. A caliphate refers to a territory under the leadership of a caliph, or an Islamic steward, who is believed to be a religious successor to Muhammad and a leader of the entire Muslim community.

“Most have either been tortured or their family members have been killed,” Taimoorazy said. “A few have superficially converted to Islam by reciting the shahada [Muslim profession of faith] to remain alive, although in their hearts they remain Christian.”

IS displaced about 170,000 Christians inside Iraq, Taimoorazy estimates. Half of those were able to migrate to slums and refugee camps in cities such as Amman, Jordan, and in small villages in Turkey and surrounding areas of Beirut.

Still others were tortured or killed, said Taimoorazy, who herself was harassed daily during her childhood in Iran under the Islamic regime, she said, and was smuggled to the U.S. as a teenager.

“We don’t have accurate statistics as of now, but we do know there are several hundred Christian women who were sold into sex slavery from the Nineveh Plains and Mosul,” she said. “Many have been crucified on their doorsteps. Hundreds of women were raped in front of their husbands and later forced to witness the execution of their husbands.”

The Minority Rights Group International, a London-based organization advocating for Iraqi Christians and similarly situated minorities in more than 60 countries, released a study in June conducted in cooperation with the Institute for International Law and Human Rights, No Peace Without Justice and the Unrepresented Nations and People Organization, all non-governmental organizations.

As many as 600,000 to 1.2 million members of Iraqi’s minority communities of Christians and others have been displaced, according to the report, “Crossroads: The future of Iraq’s minorities after ISIS.” The retaking of Mosul that began in October 2016 displaced an additional 441,720, the report said, based on numbers from the United Nations High Commissioner for Refugees. In total, more than 3 million people have been internally displaced in Iraq since June 2014.

Of Iraq’s Christian community that numbered 1.4 million people in 2003, no more than 300,000 remained as recently as March, the report estimates. The research conducted in February and March showed 100-200 people were still leaving the region each day.

The Minority Rights Group International has uncovered evidence of mass atrocities, including mass graves containing hundreds of bodies. Minorities including Christians will continue to suffer amid competing land claims and the proliferation of different armed militias, the group said in its report, available at minorityrights.org.

Taimoorazy is advocating in the U.S. and in Europe for the inclusion of the Nineveh Plains as a province in the Federation of Iraq.

In October 2016, her Iraqi Christian Relief Council initiated Operation Return to Nineveh, with plans to continue the campaign indefinitely, she said. The group is working to rebuild and furnish homes and churches, rebuild the water infrastructure and provide electricity. Taimoorazy’s council is online at victimsofisis.org.

“Yes, we have defeated [IS] in Iraq, but [IS] will have won if the Christian community in the West does not rise up to help their brothers and sisters in the East,” she told BP. “It’s up to us to act. If not us, then who?”

Most viewed articles
The Healing by the Pool of Bethesda116
Metropolitan Hilarion meets with leaders of a major inter-Cristian humanitarian organization99
Life Savers91
Patriarch Porfirije: There is No Peace without Peace with God and the Desire to Live According to God’s Commandments88
Metropolitan Onuphry: One Needs to Search for the Truth in Spiritual Life, not Easy Ways69
Metropolitan Hilarion of Eastern America and New York Reposes in the Lord67
Patriarch Kirill: The Peoples of Russia and Ukraine Have No Interest in the Conflict61
Communion restored between the Serbian Orthodox Church and the Macedonian Orthodox Church – Ohrid Archbishopric58
Celebrating 100 Years with Paschal Joy35
Most popular authors
Pravmir.com team441
Fr. Theodore Stylianopoulos116
Archpriest John Moses (+2019)91
Priest Luke A. Veronis35
Maria Trushanina1