Witnesses to the Holy Spirit

When the Temple guards, the soldiers who kept order in the House of God, were sent by the Temple authorities to seize the Lord, they achieved nothing, having been unable to lay hands on Him. When they were asked sternly why they had not brought Him, they replied: “No one has ever spoken like this Man” [cf. John 7:46]. There was some sort of power in the words of Christ the Savior, but not in those of His disciples – for Divine might spoke in Him, while human weakness spoke in them. Even after the disciples had seen the Risen One with their own eyes, they hid in fear behind locked doors, still disbelieving and doubting. Even when they saw Him on the mount in Galilee, as the Evangelist Matthew relates, some worshipped Him, while others doubted, having assumed that it was an apparition.

But several weeks later, on the Feast of Pentecost, everything changed. Less than a month had passed since the Lord had died on the place of the skull, in full sight of all, and then risen, appearing only to the faithful. Then suddenly there was a great noise and troubled voices – and Christ’s disciples came out of the house and witnessed to the Risen Christ before a whole crowd. Everything in them had changed: their fear – gone without a trace; their timidity – gone without a trace; their inability to express themselves – gone without a trace. They spoke in such a way that everyone understood them, even those who had come from afar and understood their language poorly. Regardless, their words were reaching everyone. But why was that? What was going on? It was because the Lord’s Divine power had come to them. It was not by their humanity, nor by their flesh and blood, but rather by the Spirit of God that they were able to bear witness and state outright: “This Jesus, God has raised from the dead, whereof we are all witnesses” [cf. Acts 2:32]. 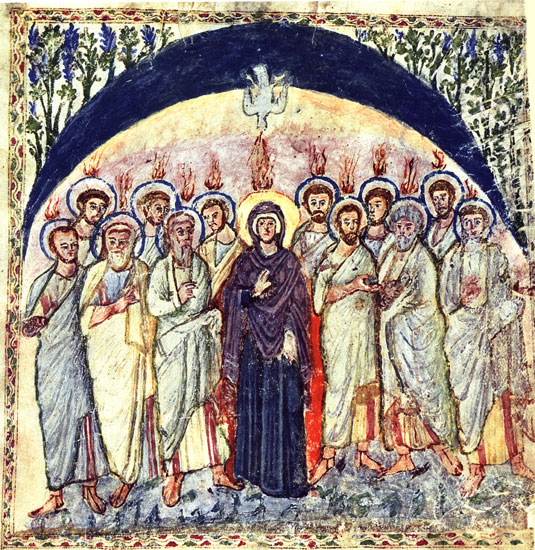 This is an important word that we should take to heart: witnesses. Every Christian is a witness to God. Think of what a witness is in our ordinary lives. In court, a witness is someone who must truthfully relate that which he saw and heard, honestly and truthfully relating what he knows to be true. Sometimes there are false witnesses and libelers, but a true witness speaks only the truth – and not just the truth, but the truth that he knows well. Thus, the power of Christian witness is that we speak of the Lord, Whom we know; of grace, which we have experienced; of blessing, which we have felt; and of faith, which we have in our hearts. If we do not have the Spirit, if we do not have this power, then we are poor witnesses. The Apostles said: “He was raised by God, of which we are witnesses,” because they knew this, saw this with their own eyes, and experienced this.

By partaking of the Holy Mysteries and turning to the Lord in prayer, do we not touch Him? All true faith means touching the Lord. If we have living contact with God, with the Risen Christ Who saves us, that means we can honestly and boldly witness to the world about our trust, our hope, and our joy. Our joy is the Lord Who has loved the world, saving every person and searching for every lost soul. We do not simply say this from hearsay. We should be witnesses to His Spirit and witnesses to His power.

Let us today pray for that which is most important: that the Lord’s Spirit, promised to each and every one of us, might come to us and touch our hearts; that we might not speak vainly, but from the experience of our own hearts, that we know our Lord and have experienced the touch of the Spirit of Christ, the Spirit of God; and, therefore, that we have the right to say: “Yes, we know Him Whom we have loved; Who has loved, saved, and granted us eternal life.” To Him we all cry out: “O Heavenly King, Comforter, Spirit of Truth, Who art everywhere present and fillest all things, Treasury of good things and Give of Life, come and dwell in us.” Amen.