On 18 April 2013, the 18th meeting of the Working group for cooperation between the Russian Orthodox Church and the Ministry of Foreign Affairs of the Russian Federation was held at the Ministry’s mansion. 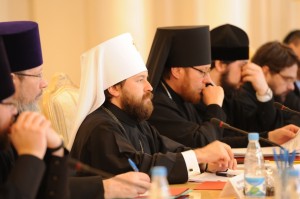 Co-chairmen of the Working Group, Mr. Grigory Karasin, state secretary and deputy foreign minister of the Russian Federation, and Metropolitan Hilarion of Volokolamsk, chairman of the Moscow Patriarchate’s Department for External Church Relations, opened the meeting.

The participants discussed various aspects of the joint work carried out since the previous meeting, including the issues of opposition to the persecution of Christians in various parts of the world, of supporting compatriots living abroad, and of cooperation in spreading Russian spiritual culture in other countries.

Outlined at the meeting were priority directions of cooperation for the nearest future.