His Holiness, Patriarch Kirill Attends Paschal Reception at the Ministry of Foreign Affairs 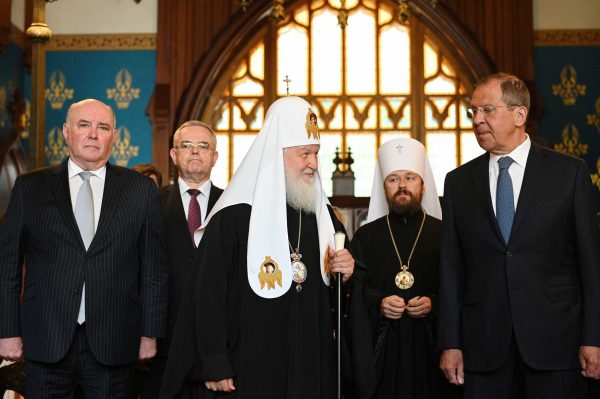 On 20 May 2019, a solemn Paschal reception was held at the large mansion of the Russian Ministry of Foreign Affairs. Attending the reception were religious leaders, heads of foreign diplomatic missions, Russian and foreign diplomats.

His Holiness Patriarch Kirill of Moscow and All Russia, who took part in the reception, was welcomed by Russian Foreign Minister Sergei Lavrov.

Minister Lavrov delivered a speech, which he began by saying:”The main Christian feast of the Radiant Resurrection of Christ symbolizes faith in the triumph of good and mercy, fills our hearts with joy and remind us of the importance of mutual aid, love of our neighbours and necessity of attaining truth and justice while opposing all kinds of evil.’

He continued to say: ‘The Russian Orthodox Church has always been with her flock and helped it to overcome the hardest trials.’

In his further remarks Minister Lavrov mentioned the centuries-long activity of the Russian Orthodox Church pertaining to the support of the Orthodox and other Christians in their strive for keeping their cultural and religious identity.

The head of the Ministry of Foreign Affairs dwelt on the situation in Ukraine, mentioning the struggle against the Russian language and culture and attacks on the canonical Orthodox Church. He added: “I am confident that attempts to break the thousand-year-long Russian-Ukrainian spiritual ties are doomed to failure. Time will put everything in its proper place.’

Minister Lavrov also said that Russia will promote the international agenda for confidence-building among representatives of different religions, civilizations and cultures. He concluded: ‘In this we are at one with the Russian Orthodox Church – a vanguard that defends historical and spiritual heritage of Russia.’

His Holiness Patriarch Kirill of Moscow and All Russia addressed those gathered and greeted them with the words of Paschal joy – Christ is Risen! and said: ‘Thanks to the traditional hospitality of the Ministry of Foreign Affairs representatives of the largest religious communities, state and public leaders and Russian and foreign diplomats can meet on this festive day, when the Resurrection of Christ fills us with real joy. Being true to the Gospel, the Church calls upon humanity to leave behind all feuds and divisions and show love and compassion to all who need special care.

‘This call is especially topical at present as people began to forget tragic events of the recent past… The unscrupulous politicians are trying to influence al spheres of life, including the activities of religious communities. In this connection it is necessary to mention heavy destruction inflicted on Orthodox unity by the provoked from outside infringement of the Patriarchate of Constantinople  on the canonical territory of the Russian Orthodox Church with the aim to destroy its integrity and terminate spiritual ties between people of historical Russia.

‘Numerous violations of rights and freedoms of the faithful of the Ukrainian Orthodox Church were mentioned in the 2018 report of the Office of the UN High Commissioner for Human Rights. ‘The Ukrainian Orthodox Church avoids any politization as it unites millions of the Ukrainian citizens irrespective of their political beliefs. We do hope that it tremendous peacemaking potential unappreciated by the previous regime will be in demand of the new Ukrainian authorities.’

His Holiness added that the believers are being discriminated not only in Ukraine and mentioned the destiny of Christians in the Middle East and North Africa and continued to say: ‘In the context of contradiction I would like to remind you of a potential of inter-church cooperation and inter-religious dialogue ardently supported by the Russian Orthodox Church. I am confident that religious leaders should bring their indispensable contribution to the strengthening of peace and accord in society.

‘Together with our Orthodox brethren we will do anything possible for preserving the unity of Orthodoxy on the basis of the age-old canonical order. We will try to promote contacts with the Local Orthodox Churches, also by inviting their Primates and representatives to our memorable events as was the case in the end of January and beginning of February.

‘We will continue our dialogue with the Roman Catholic Church, the Ancient Oriental Churches, such as Armenian, Coptic, Syriac Orthodox and Ethiopian Churches and the Assyrian Church of the East. Together we will be able to do a lot for preserving Gospel ideals in society, for peace and accord among nations.

‘We will make the life of people better through our common actions and with support of diplomatic activity and of the authorities. I can give you an example of such actions. I mean the work of the Interreligious working group for rendering aid to the Syrian people established by the Presidential Council for Cooperation with Religious Associations.

‘Our common task is to heal the wounds inflicted on the countries, nations and families by military and political conflicts. Diplomats and religious leaders can make contribution to the solution of problems of humanity today.’

In conclusion His Holiness wished all those gathered joy and peace. ‘May the Risen Christ give us strength and inspiration for creative work for the sake of the better future for us and for posterity. Christ is Risen!’