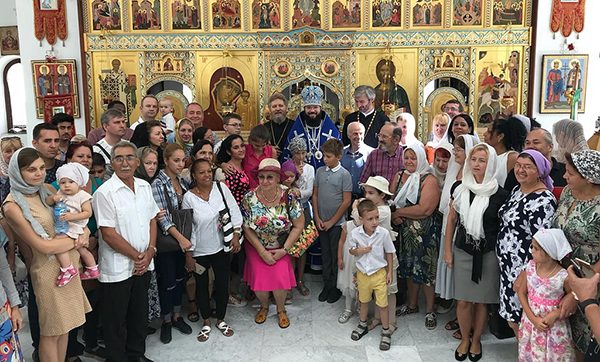 On 1-6 November 2018, with the blessing of His Holiness Patriarch Kirill of Moscow and All Russia, Archbishop Antony of Vienna and Budapest, head of the Moscow Patriarchate’s Administration for Institutions Abroad, visited Cuba. The visit was timed to the celebrations marking the 10th anniversary of consecration of the Church of the Kazan Icon of the Mother of God in Havana. The archpastor was accompanied by Deacon Sergy Kalashnikov, a staff member of the Administration for Institutions Abroad.

On November 1, upon his arrival in Havana, Archbishop Antony visited the Kazan Church and venerated its shrines, and met with Mr. Sergei Reschikov, Counsellor-Minister of the Russian Embassy in Cuba.

After the meeting the head of the Administration for Institutions Abroad visited the Havana Cathedral and saw the historical centre sights.

On November 3, the Memorial Saturday, Archbishop Antony of Vienna and Budapest celebrated a requiem service at the Church of the Kazan Icon of the Mother of God in Havana. Concelebrating with him were Archpriest Vyacheslav Bachin, rector of St. Nicholas Patriarchal Metochion in Bari, who in 2009-2011 served as rector of the Kazan parish; Rev. Savva Gagloyev and Deacon Sergy Kalashnikov. Later that day the hierarch attended a Russian language class at the parish centre and met with Mr. Vladimir Yaroshevsky, representative of the Rossotrudnichestvo in Cuba.

The head of the Moscow Patriarchate’s Administration for Institutions Abroad also met with Archbishop Giorgio Lingua, Apostolic Nuncio to Cuba. The hierarchs emphasized the importance of the meeting between Patriarch Kirill of Moscow and All Russia and Pope Francis that took place in Cuba in 2016, and discussed various issues of mutual interest.

In the evening Vladyka Antony celebrated Vespers in the Kazan church in Havana, during which the Akathist to the Mother of God was read out.

On November 4, commemoration day of the Kazan Icon of the Mother of God, Archbishop Antony officiated at the Divine Liturgy in the Kazan church. Concelebrating with His Eminence were Archbishop Vyacheslav Bachin, Rev. Savva Gagloyev and Deacon Sergy Kalashnikov.

The Liturgy was followed by a procession with the cross and a prayer service at the Kazan Icon of the Most Holy Theotokos. Archbishop Antony delivered a homily and congratulated the rector and parishioners on the patronal feast and the 10th anniversary of consecration of the church. On behalf of the worshippers Rev. Savva Gagloyev warmly greeted the archpastor. 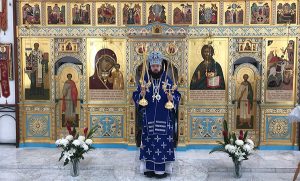 The same day later a reception was given at the Kazan church that marked the Unity Day (national holiday in Russia) and the 10th anniversary of consecration of the first Russian church in the Caribbean region.

On November 6, to conclude his visit, Vladyka Antony met with representatives of the Cuban mass media. The same day the archpastor departed for Moscow. 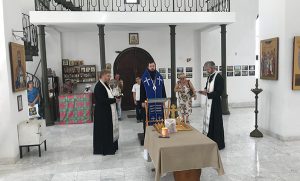 based on the information provided by the website of

the Church of the Nativity of St. John the Baptist in Presnya in Moscow