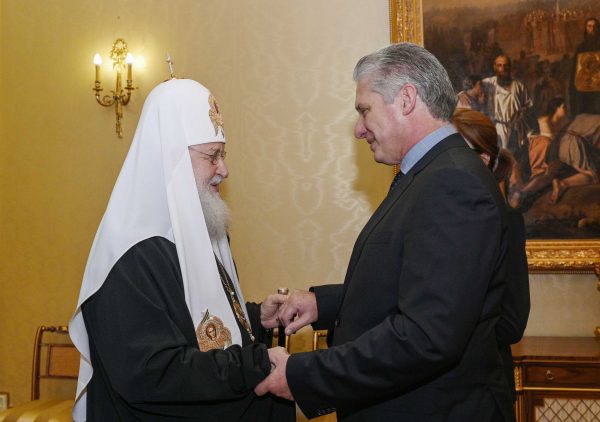 On October 30, 2019, His Holiness Patriarch Kirill of Moscow and All Russia met with the President of the Republic of Cuba, Mr. Miguel Mario Diaz-Canel Bermúdes.

They were joined at the meeting, which took place at the Patriarchal and Synodal residence in Danilov Monastery in Moscow, by Mr. Bruno Rodriguez Parrilla, Cuban Minister of Foreign Affairs; Mr. Rodrigo Malmierca Diaz, Cuban Minister of Foreign Trade and Foreign Investment; Mr. Luis Alberto Rodriguez López-Calleja, Counsellor to the Cuban President; Mr. Gerardo Peñalver Portal, Ambassador Extraordinary and Plenipotentiary of the Republic of Cuba to the Russian Federation; Mr. Andrei A. Guskov, Ambassador Extraordinary and Plenipotentiary of the Russian Federation to the Republic of Cuba; Archpriest Nikolai Balashov, deputy chairman of the Moscow Patriarchate’ Department for External Church Relations (DECR); Archpriest Sergy Zvonarev, DECR secretary for far abroad countries; and Rev. Andrei Titushkin, staff member of the same secretariat.

While greeting the President of Cuba, the Primate of the Russian Orthodox Church mentioned their first meeting in Moscow in September 2018 and cordially greeted the high guest with his election as President.

“I would like to express my feeling of deep satisfaction with the changes that are taking place in Cuba. The new Constitution has opened new possibilities for economic development and established a sustainable system of state governance.  The Constitution contains a tradition set up by the Revolution, that is care for justice, for the poor and oppressed people.

His Holiness mentioned his visits to Cuba in 1998, 2004 and 2008 as Metropolitan of Smolensk and Kaliningrad, the DECR chairman. In 2004 he met with Fidel Castro, the first secretary of the Communist Party of Cuba and discussed a possible construction of a Russia church in Cuba. The head of the state approved the idea, and in October 2008, the Office of the Great Blessing of the Church of the Kazan Mother of God was celebrated by Metropolitan Kirill and bishops and clerics of the Moscow Patriarchate and the Russian Orthodox Church Outside of Russia.

“The church has become a place where Russian people come, and the number of tourists and pilgrims is increasing,” His Holiness said.

His Holiness Patriarch Kirill of Moscow and All Russia recalled his visit to Latin America in 2016. The first country was Cuba, where we had long and informative talks with Raúl Castro who took part in many events. Thanks to him we were introduced to the life of the Cuban people and of the Orthodox community in Cuba.

“Certainly, my meeting with Pope Francis was the culmination of the visit,” His Holiness underscored. I told him that we were meeting in the right place at the right time. Cuba provided ideal conditions for the historic meeting, the very first of the kind. We spent two hours at Havana airport and discussed very important issues in an open brotherly talk. As a result of this meeting, the words ‘genocide of Christians’ have come into international use, and even the US Congress began to use them after our Joint Declaration had been issued.

Pope Francis and Patriarch Kirill also discussed the problem of terrorism and other topical issues, including the situation in Ukraine. “Our appeal to solidarity and peacemaking was very important. Participation of the Church in such events must not aggravate conflicts among people.” The Pope and the Patriarch expressed their position on the Ukrainian crisis very clearly.

Patriarch Kirill believes that the Church should reduce the differences and seek compromise. “The Russian Orthodox Church and the Roman Catholic Church are maintaining this position. Yet we cannot say the same about the Greek Catholics in Ukraine who are not only a part of civil conflict, but inspire it. I think that Pope Francis also has certain difficulties with the Greek Catholics as actions of this group of people are not manageable.”

The Primate of the Russian Church said that the Joint Declaration ‘has laid a foundation for common actions of the two Churches in the face of problems that concern the majority of people in the world today.”I would like to say once again that I am happy to see changes in Cuba. I am convinced that these changes will be conducive to the religious life in your country as religious life is a very important part of human life. Our Church is in favour of the development of relations between Russia and Cuba in various fields, including the realm of human spirit,” Patriarch Kirill of Moscow and All Russia said in conclusion.

President of the Republic of Cuba Mr. Miguel Mario Diaz-Canel Bermúdes thanked the Primate of the Russian Orthodox Church for an opportunity to meet with him and conveyed greetings from Raúl Castro.

The Cuban President said that the visit of His Holiness to Cuba has left best impressions. The historic meeting of His Holiness Patriarch Kirill with Pope Francis in Cuba was a great honour for the entire Latin American region, said the President and added that the Russian Orthodox church built in Cuba as a sign of friendship between the two nations has a great spiritual and cultural importance.

“We want to strengthen relations between the Moscow Patriarchate and the Cuban government. We are satisfied with the present state of our bilateral relations and will seek to intensify them as they are a symbol of friendship between the Cuban and Russian people,” Mr. Miguel Mario Diaz-Canel Bermúdes said in conclusion.

At the end of the meeting His Holiness Patriarch Kirill and President of the Republic of Cuba exchanged memorable gifts.