125th Anniversary of the Ministry of St. Raphael of Brooklyn Celebrated in Brooklyn 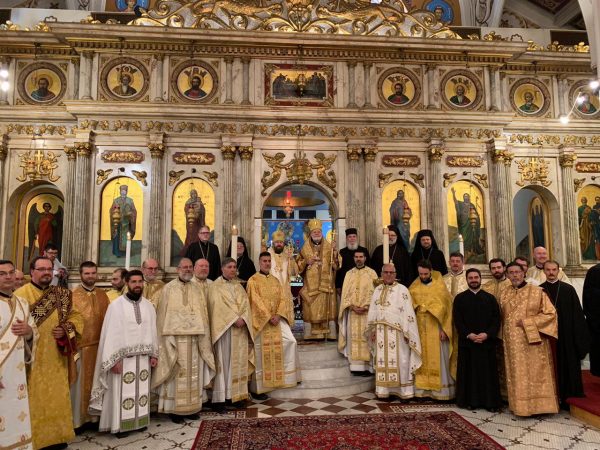 On 19th – 20th October 2019, the celebrations marking the 125th anniversary of the beginning of the ministry of St. Raphael of Brooklyn in North America and the centenary of Saint Nicholas Cathedral of the Antiochian Orthodox Christian Archdiocese of North America took place in Brooklyn, New York.

With the blessing of His Holiness Patriarch Kirill of Moscow and All Russia and at the invitation of His Eminence Joseph, Archbishop of New York, Metropolitan of All North America, head of the Antiochian Archdiocese in the USA, Metropolitan Hilarion of Volokolamsk, chairman of the Moscow Patriarchate’s Department for External Church Relations, took part in the celebrations.

On 20th October, 18th Sunday after Pentecost, Metropolitan Joseph and Metropolitan Hilarion officiated at the Divine Liturgy in Saint Nicholas Cathedral in Brooklyn. Concelebrating with the hierarchs were Bishops Basil of Wichita and Mid-America, Thomas of Oakland, Charleston and the Mid-Atlantic, John of Worcester and New England, Anthony of Toledo and the Midwest, and Nicholas of Miami and the Southeast.

Attending the divine service were Mr. Vladimir Safronkov, deputy permanent representative of the Russian Federation to the United Nations; benefactors of the Antiochian Archdiocese from various U.S. cities; numerous parishioners and guests.

The Liturgy was celebrated in the Syriac, Church Slavonic, Greek and English languages.

The Gospel reading was followed by a homily delivered by Metropolitan Hilarion.

After the Divine Liturgy Metropolitan Joseph greeted all those present with the memorable dates and shared his recollections of the visit of the delegation of clergy and laity of the Antiochian Archdiocese to the Russian Orthodox Church in summer 2019 and of their meetings with His Holiness Patriarch Kirill of Moscow and All Russia and His Eminence Metropolitan Hilarion of Volokolamsk. As Metropolitan Joseph noted, the Russian Orthodox Church gave education and episcopal consecration to Archimandrite Raphael, future saint of Brooklyn, who became the archpastor for all those coming from Antioch to the USA.

Metropolitan Joseph asked Metropolitan Hilarion to convey his special gratitude to His Holiness Patriarch Kirill and in his person – to the plenitude of the Russian Orthodox Church, as well as to the leadership of Russia and all Russian people for the unwavering support they render to the Orthodox Church of Antioch and all the Syrian people in the ordeals which have befallen them in the recent years.

Metropolitan Hilarion noted with gratitude the long-term brotherly cooperation between the Church of Antioch and the Russian Church in North America, saying: “The ecclesiastical mission of the Valaam monks on the North American continent, which had begun over two hindered years ago, by the beginning of the 20th century bore abundant spiritual fruit – under the omophorion of the Russian Orthodox Church in the USA and Canada there was a place for Orthodox Christians of various nationalities. To take archpastoral care of the numerous Syrian flock, with the blessing of the supreme authority of the Russian Church, Archimandrite Raphael (Hawāwīnī), fellow-pastor of Archbishop Tikhon of North America, was consecrated as Bishop of Brooklyn. Taking into consideration the specific nature of the mission of Orthodoxy in North America among indigenous peoples and non-Christians, and feeling his particular pastoral responsibility for the increasing number of immigrants from traditionally Orthodox countries, St. Tikhon, future Patriarch of Moscow, put forward the unique proposal: to organize within the Russian Church’s diocese of North America dioceses not on territorial grounds (“one bishop in one city”), but on ethnic grounds, thus creating equal rights and opportunities for all heads of national dioceses. Regrettably, for a number of reasons, including that of the initiated persecutions of the Russian Church in the homeland, St. Tikhon’s plan was not implemented.”

After the Divine Liturgy the hierarchs, clergy and worshippers attended the brotherly repast in the parish hall of Saint Nicholas Cathedral.