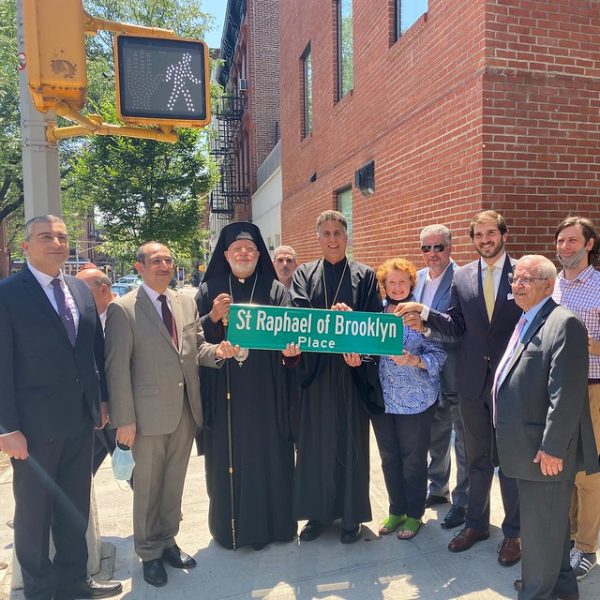 Rejoice, O Father Raphael! The stretch of State Street between Hoyt and Bond streets in Brooklyn, New York has been co-named “St. Raphael of Brooklyn Place.” St. Nicholas Antiochian Orthodox Christian Cathedral – the first community that St. Raphael founded in 1895, and the see of His Eminence Metropolitan Joseph – stands at 355 State St.

Following the celebration of the Hierarchical Divine Liturgy on Sunday, June 6, 2021, His Eminence led the procession of clergy and laity to the corner of State and Bond streets as they sang the apolytikion (troparion) of St. Raphael. His Eminence tugged on the cord that covered the street sign high above, and revealed the new co-name of the street below honoring North America’s first Antiochian saint.

“St. Raphael ministered to Orthodox Christians of all backgrounds and interacted with people of all creeds. He traveled the breadth and width of not only the United States, but Canada and Mexico, gathering his scattered flock,” Sayidna Joseph said. “He planted the seeds of this ancient faith on these shores, a faith now embraced by peoples of all races and backgrounds.

“It is for this very reason St. Raphael belongs to this entire community. Both the faithful of this historic Cathedral and those who live and work around it can embrace the life of St. Raphael of Brooklyn. We are honored to share this block, this borough and this city with all of you and this outward example shows that the city and its inhabitants also honor our presence here.”

Joining His Eminence were clergy from the different Orthodox Christian jurisdictions, along with the following civil authorities.

His Excellency, Bassam Sabbagh, Ambassador of Syria to the United Nations

His Eminence thanked Fr. Thomas Zain, dean of the Cathedral, all the civil authorities who secured the renaming, and the Cathedral neighbors and associations who signed petitions to co-name “St. Raphael of Brooklyn Place,” adding that it gave him hope for the future to see communities working together.

Video of the Hierarchical Divine Liturgy

Video of the ceremony

Video of the unveiling