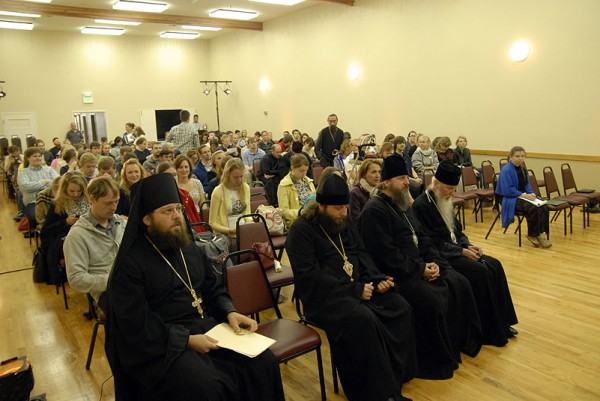 The last two days of the 13 th All-Diaspora Russian Orthodox Youth Conference were particularly busy. Archimandrite Irinei (Steenberg) gave a lecture, followed by speeches by Alena Plavsic, Development Manager of the Fund for Assistance to the Russian Orthodox Church Outside of Russia, and by Niko Petrogeorg, North American Project Coordinator of FOCUS—the Fellowship of Orthodox Christians United to Serve North America.

On the evening of July 2, 2014, the Russian Center of San Francisco hosted a concert attended by His Eminence Metropolitan Hilarion of Eastern America and New York, First Hierarch of the Russian Orthodox Church Outside of Russia, newly-consecrated Bishop Nicholas of Manhattan, other hierarchs, clergymen and members of the diaspora in San Francisco, as well as the youth conferees. A literary-musical work based on the life of St John of Shanghai and San Francisco was performed by a youth choir under the direction of Nicholas Kotar.

After a buffet, an improvised concert was given by the youth and clergymen from the participating countries which included Russian folk and military songs, as well as folk and contemporary dance.

Later that day on a cruise, the participants admitted that they could not choose a winner among the entries. His Eminence Archbishop Kyrill of San Francisco and Western America suggested drawing lots, which resulted in Vladyka Panteleimon congratulating three winning groups, with another three receiving honorable mention.

The young conference participants then spent the rest of the cruise socializing and enjoying the beautiful evening environs of San Francisco.

The youth forum concluded with a moleben at the reliquary of St John of Shanghai and San Francisco performed by Vladyka Panteleimon. His Grace then anointed all the participants with oil from the lampada of the saint.

The main conclusion the conferees came away with was the need to unite youth as the most mobile and creative part of the Body of Christ around charity and works of mercy.

Most viewed articles
When We Do the Wrong Things Habitually129
Unbalanced Fears120
The Tattoo on Our Being107
Metropolitan Onuphry: “Do Not Be afraid of Demons, They Have No Power”105
350 Thousand Believers Take Part in Cross Procession in Kiev91
Delegations of Local Orthodox Churches Arrive in Kiev for the Celebration of Baptism of Rus75
St John of Shanghai Summer Camp Concludes in Switzerland42
The Frontier of Personhood11
Most popular authors
Pravmir.com team313
Abbot Tryphon129
Fr. James Guirguis121
Fr. Andreas Agathokleous107
Archpriest Stephen Freeman10