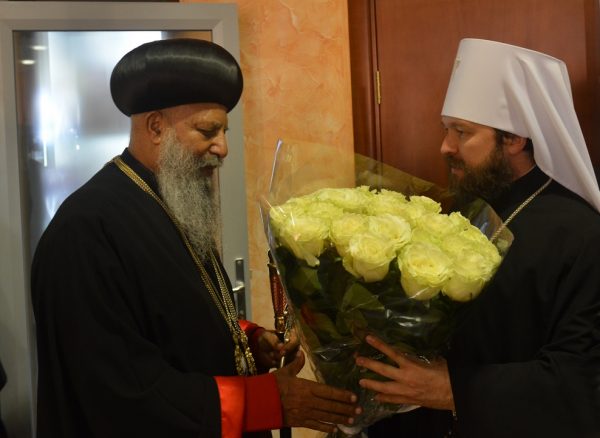 At the Vnukovo Airport His Holiness Patriarch and Catholicos Abune Mathias was met by Metropolitan Hilarion of Volokolamsk, chairman of the Moscow Patriarchate’s Department for External Church Relations.

Taking part in the meeting were also H.E. Grum Abay Teshome, Ambassador Extraordinary and Plenipotentiary of the Federal Democratic Republic of Ethiopia to the Russian Federation; staff members of the Ethiopian Embassy; Hegumen Feofan (Lukyanov), head of the DECR Protocol Sector; Hieromonk Stefan (Igumnov), DECR secretary for inter-Christian relations; other DECR staff members; as well as representatives of the Ethiopian diaspora and the Moscow clergy.

Greeting Patriarch Abune Mathias, Metropolitan Hilarion expressed his hope that His Holiness’ visit to the Moscow Patriarchate would be fruitful and would further strengthen the centuries-old relationships between the Russian Orthodox Church and the Ethiopian Orthodox Tewahedo Church.

Addressing the DECR chairman, the head of the Ethiopian Church noted that his visit would help revive the historical friendship between the peoples of Russia and Abyssinia.

During the visit that will last until May 20, His Holiness Abune Mathias will meet with His Holiness Patriarch Kirill of Moscow and All Russia and with high-ranking government officials of the Russian Federation and will visit the higher educational institutions of the Russian Orthodox Church, as well as churches and monasteries in Moscow and the Moscow Region.

The Ethiopian Orthodox Tewahedo Church, which belongs to the family of the Oriental Churches, received its autocephaly in 1959 from the Coptic Patriarchate. Today the Ethiopian Church is not only the largest Oriental Church, but also one of the largest Christian communities in the world. It has the membership of over 65 million people living in Ethiopia and in diaspora, mainly in the USA and Canada.

Christianity came to Ethiopia as far back as the 1st century AD, when Apostle Philip was preaching in those lands.

The relations between the Russian Orthodox Church and the Ethiopian Church were established in the middle and latter half of the 19th century, thanks to a large extent to the head of the Russian Ecclesiastical Mission in Jerusalem, Archimandrite Porfiry (Uspensky), who had gathered massive amount of information on the history, doctrine, liturgy and traditions of the Ethiopian Christians. The 1950s-80s were the decades of most intensive inter-church contacts, through the efforts of the chairman of the Moscow Patriarchate’s Department for External Church Relations, Metropolitan Nikodim of Leningrad and Novgorod. That period was marked by exchanges of official delegations, including the high-level ones. In those years the Ethiopian students studied at the educational institutions of the Moscow Patriarchate.

These days the contacts between the two Churches are intensifying again. In September 2011, in Addis Ababa Metropolitan Hilarion met with His Holiness Abune Paulos, predecessor of Patriarch Abune Mathias. In November 2017, a delegation of the Ethiopian Orthodox Tewahedo Church visited Moscow, and in March 2018, a delegation of the Moscow Patriarchate arrived in Ethiopia to take part in the celebrations marking the 5th anniversary of enthronement of Patriarch Abune Mathias.

Message of the Holy Assembly of Bishops on Kosovo and Metohija