Source: DECR
Natalya Mihailova | 23 September 2016
September 21, 2016 – The 14th Plenary Session of the Joint Commission for Theological Dialogue between the Orthodox Church and the Roman Catholic Church completed its work in Chieti, Italy. 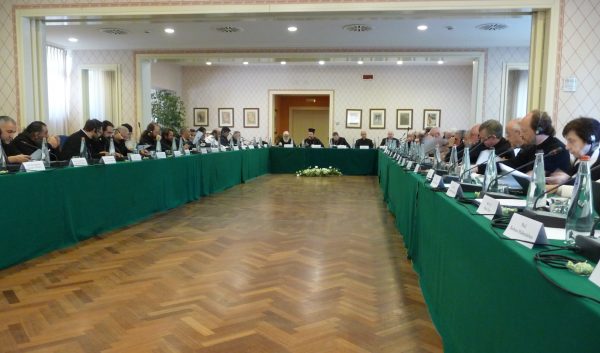 After the necessary amendments and additions, the plenary session approved a common document on Synodality and Primacy during the First Millennium: Towards a Common Understanding in Service to the Unity of the Church.

The delegation of the Georgian Church made a statement expressing disagreement with particular paragraphs of the document. This statement was included in the communique adopted by the plenary session and will be present as a footnote in the common document to be published on behalf of the Commission in the nearest future.

The meeting considered a topic to be chosen as a follow-up of the dialogue. The head of the Russian Orthodox Church delegation, Metropolitan Hilarion of Volokolamsk, chairman of the Moscow Patriarchate Department for External Church Relations (DECR), put forward a proposal to devote the next stage of the dialogue to the theme of synodality and primacy in the Churches of East and West in the second millennium, stressing that in the framework of this theme the Commission should complete the discussion on Uniatism as a phenomenon which arose after the 1054 schism and which still constitutes a stumbling stone in the Orthodox-Catholic relations.

Metropolitan Hilarion reminded the meeting that the Joint Commission was to discuss the issue of ecclesiological and canonical consequences of Uniatism at its plenary session in Baltimore, USA, as far back as the year 2000. It was to become a continuation of the work that began in the 1990th with the document condemning Uniatism adopted in Balamand, Lebanon, in 1993, followed by a document on the same issue drafted in Ariccia in 1998. However, the work in Baltimore was not completed because of disagreements that arose both between the Catholic and Orthodox sides of the dialogue and within each of the sides.

After the Joint Commission resumed its work after a 6-years break, Metropolitan Hilarion continued,

‘it was proposed that we should start discussing the issue of primacy and synodality. Our Church agreed to this proposal on the condition that within the context of the theme of primacy and synodality the Commission will explore the canonical and ecclesiological consequences of Uniatism. However, for ten years from 2006 to 2015 the Commission has never revisited this theme. The logic of our dialogue requires that, after completing the document on primacy and synodality in the Church of the first millennium, we should move to considering synodality and primacy in the Churches of East and West in the second millennium. And here we will have to deal with the issue of the 1054 schism and also the issue of Uniatism as one of the central ones in the second millennium. I can predict that there will be many divisive issues and that we will not agree on every point. However, the aim of our dialogue is not simply to agree on the points of which we agree anyhow, but we have to explore also the points of disagreement. And the issue of Uniatism is one such extremely burning issues’.

Metropolitan Hilarion drew the attention of the Commission to the actions of leaders of the Ukrainian Greek Catholic Church, inadmissible in Christian ethics:

‘We can hear the statements made by the UGCC Supreme Archbishop Svyatoslav Shevchuk, which go against the line of our dialogue, create obstacles on its way and sow distrust between the Orthodox and the Catholics. There was a meeting between Pope Francis and Patriarch Kirill in February in Havana. For our Church it was a historic event since the Pope and the Patriarch have never met before. We believe it was a very good meeting as it opened a new page in our bilateral relations. However, immediately after it finished it was heavily criticized by the Ukrainian Greek Catholics and not by some group of the faithful but the UGCC leaders themselves. It was not just criticized but there were many insults and unfair attacks. We have to understand that there are people in our Churches who create obstacles on our way, and we have to bear it in mind when we speak about the future of our dialogue’.

On his part, Archimandrite Irenaeus (Steenberg), a member of the Russian Orthodox Church delegation, pointed out that in discussing the topic of primacy and synodality in the Churches of East and West in the second millennium, some points will certainly arise on which the two parts of the Commission will have serious disagreements. Nevertheless, it is necessary to discuss this topic, as well as the issue of Uniatism. He stressed that it would be difficult for the Russian Orthodox Church to continue working in the Orthodox-Catholic dialogue if the problem of ecclesiological and canonical consequences of the uniaremains unsolved.

After a discussion it was agreed to leave the question of the topic for further discussion at the discretion of the Joint Commission’s coordinating committee, which is to meet during 2017.

In the communique adopted at the closing meeting, the participants in the plenary session thanked Msgr. Bruno Forte, Archbishop of Chieti-Vasto for the hospitality.

The Joint Commission also expressed solidarity with the suffering population of the Middle East and a number of countries in Europe and the world. The document makes a special mention of the Metropolitans of Aleppo kidnapped by terrorists – Paul, Patriarchate of Antioch, who is a member of the Joint Commission, and Gregory John Ibrahim, Syro-Jacobite Church.