18,000 Ukrainian Citizens Have Crossed the Russian-Ukrainian Border in Twenty-Four Hours 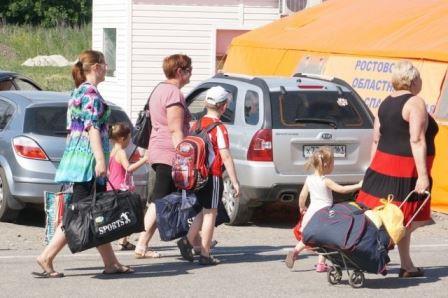 Rescuers of the Don region have been welcoming and aiding refugees for the past two weeks, according to the Department for Prevention and Emergency Response of the Rostov region.

People are leaving their homes in a hurry and crossing the border by car and on foot.

In the past twenty-four hours, four field reception stations – with professional staff and rescuers from the Department for Prevention and Emergency Response of the Rostov region – next to the cities of Novoshahtinsk, Gukovo, Donetsk, and the Avilo-Uspenka village of the Matveyev-Kurgansky district, have welcomed 565 people, including 172 children. They have been given all necessary assistance and support.

Due to the increasing number of citizens arriving, it is planned to develop four additional towns, each with a livelihood capacity of 500 people. New towns will be built by rescuers of the 495 Special Center of the Russian Ministry of Emergency Situations.

Twenty municipalities are working in a state of an emergency situation (fifteen by order of the Governor and five by order of the Administration’s Head); the interdepartmental operational headquarters and thirteen operational groups are continuing their work.

Most viewed articles
Hierarch from North Macedonia Gives Advice to the Ukrainian Orthodox Church106
Patriarch Kirill: We In No Way Question the Healing Power of the Holy Mysteries of Christ!99
Participating in God’s Vision90
Lessons from Saint Mary of Egypt85
Ethiopian Patriarch Thanks Patriarch Kirill For the Support During the Persecution77
Patriarch Kirill: Faith in the Lord Gives Us the Ability to Distinguish Between Good and Evil62
First Orthodox Prayer Book in Portuguese Published in Portugal61
Representative of Russian Patriarch Delivers Rehabilitation Facilities to Children in Syria35
On Feeling Forsaken35
Maronite Patriarch Thanks Russian Patriarch for His Support for Christians in the Middle East19
Most popular authors
Pravmir.com team459
Priest Dustin Lyon90
Justin Doty85
Archpriest John Moses (+2019)33