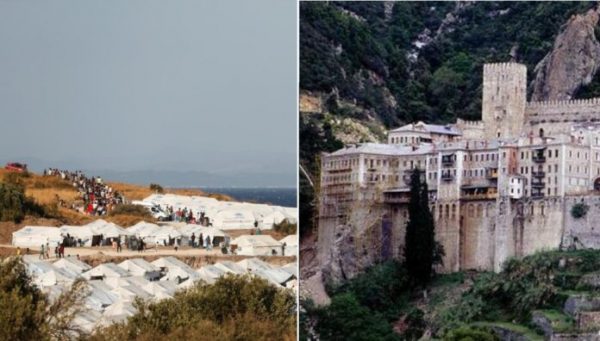 Photo on left by Reuters / Yara Nardi. Photo on right by katra.eu (kastrologos).

After testing the thousands of refugees who have now been resettled at the new Kara Tepe camp on Lesvos after the Moria fire, 243 of them have been found positive for the coronavirus.

Speaking during a regular briefing on Monday, Stelios Petsas, the spokesman for the Greek government, said all 7,064 people who entered the new camp had been tested.

The average age of those confirmed positive was 24 and most were asymptomatic, Petsas said. A further 160 people, mainly police and administrative staff who had come into contact with the refugees, were tested and all were negative for the virus.

These positive cases from Lesvos were added to Greece’s official coronavirus figures on Monday, with the country recording a record 453 new cases in total. There were six deaths.

Greek health authorities ordered an Orthodox monastery on Mount Athos to be placed under quarantine on Monday, after at least eight confirmed cases of coronavirus were recorded among the monks living there.

The monastery of Agios Pavlos (Saint Paul), founded in the late 10th to early 11th century by Saint Paul of Xeropotamou, is in the western part of the Athos peninsula.

According to an Athens-Macedonia News Agency (AMNA) report, the condition of one of the monks is considered “serious” and he has been evacuated for treatment to a Thessaloniki hospital.

The monastery, with 31 monks, ranks fourteenth in the hierarchy of all the Athonite monasteries. Its library contains 494 hand-lettered manuscripts, and over 12,000 printed books.