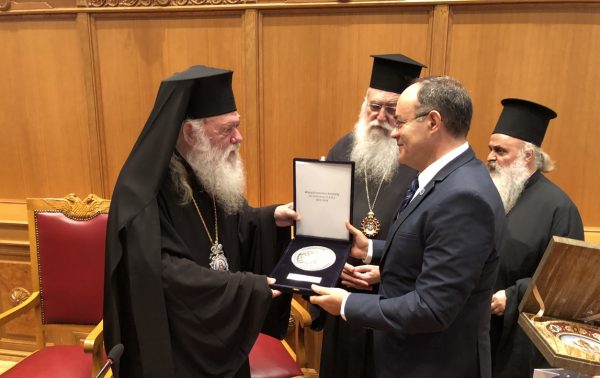 On June 7, 2018, the chairman of the State Duma Committee for Developing Civil Society, Public and Religious Organizations and member of the international secretariat of the Inter-Parliamentary Assembly of Orthodoxy (IAO), Mr. S. Gavrilov met in Athens with His Beatitude Jeronymos, Archbishop of Athens and All Greece, and members of the Holy Synod of the Greek Orthodox Church. Present at the meeting was also the IAO president. Alekseyev.

Archbishop Jeronymos expressed thanks to Patriarch Kirill of Moscow and All Russia and State Duma speaker V. Volodin for their contribution to the building of constructive state-church dialogue based on spiritual and moral values, constitutional principles of freedom of conscience and faith and non-interference of state bodies in the work of religious organizations and gave high value to the work of the Inter-Parliamentary Assembly of Orthodoxy.

As S. Gavrilov noted, among the issues under discussion was the preservation of the unity of the Church and prevention the ‘Ukrainian scenario’ of the Orthodox internal church schism from spreading.

‘For an effective opposition to such challenges it is necessary to unite our efforts on international level, including in cooperation with Orthodox communities abroad, in particular with the Greek Orthodox Church, in which Christian traditions are respected’, Mr. Gavrilov said.

Discussed were also problems involved in opposition to extremism and terrorism and destruction of traditional Christian values in the world.

As a token of the meeting, Archbishop Jeronymos presented Mr. Gavrilov with an icon of St. Paul, the State Duma Committee for Developing Civil Society, Public and Religious Organizations reported on its website.