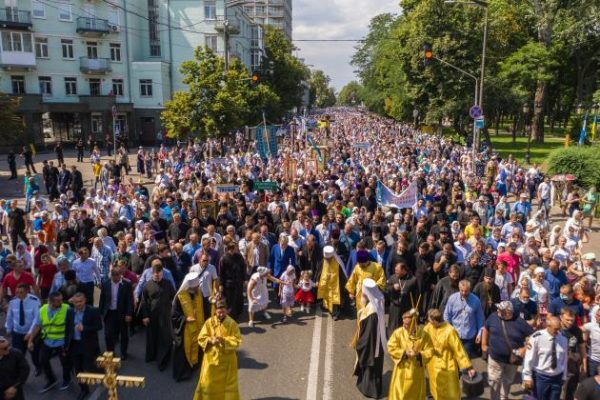 The All-Ukrainian Religious Procession on the occasion of the 1033 anniversary of the Baptism of Rus and the Day of Remembrance of the Holy Equal-to-the-Apostles Grand Duke Vladimir took place in Kiev on July 27, 2021. According to rough estimates, 350 thousand people took part in the prayer procession.

The procession began at 1.30 p.m. after a thanksgiving service on Vladimirskaya Gorka near the monument to the Holy Equal-to-the-Apostles Grand Duke Vladimir, the Baptist of Rus. The procession was headed by four miraculous icons of the Mother of God – “Kasperovskaya”, “Lyubechskaya”, “Pochaevskaya” and “Zimnenskaya” – the image of the Equal-to-the-Apostles Grand Duke Vladimir and a shrine with his holy relics.

Due to the huge number of participants, the cross procession with a distance of 3.5 kilometers lasted for several hours. At about 2.30 pm, when the shrines were brought into the Kiev-Pechersk Lavra accompanied by the festive chime of bells, tens of thousands of believers were still standing on Vladimirskaya Gorka, humbly awaiting the opportunity to join the general procession.

After the arrival of the clergy to the Lavra, an all-night vigil began at the square in front of the Dormition Cathedral.

Metropolitan Anthony of Borispol and Brovary, chancellor of the Ukrainian Orthodox Church, reported on the number of participants in the procession.

“We see that there were many more people compared to [the number of participants] in 2019. Therefore, according to our rough estimates, there are about 350 thousand believers. This is a really large number of people, which testifies to the devotion of the Ukrainian people to the choice made by the holy prince Vladimir,” Metropolitan Anthony said at a briefing in the Lavra.