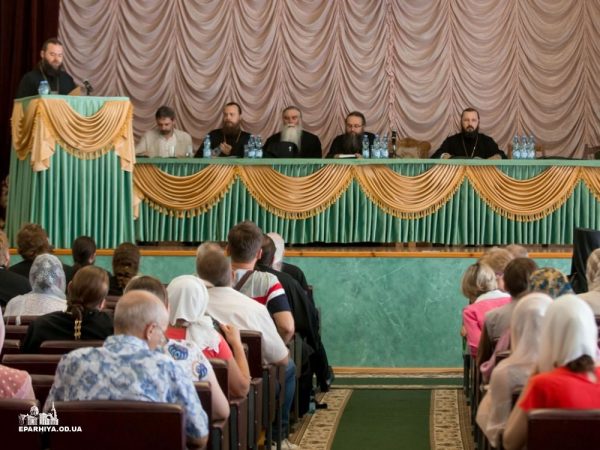 Some fifty scholars are taking part in the conference “The Legacy of Mt Athos and Traditions of Hesychasm in the History and Culture of Ukraine” held in Odessa, Ukraine, which began on July 20, 2019, on the territory of the former Athonite St Andrew Metochion of St Elias Skete (now the Odessa St Ilya Monastery), scheduled to coincide with the 170th anniversary of the birth and 25th anniversary of the glorification of St Gabriel of Athon the Odessa Wonder-worker, as reported by afon.org.ua.

The organizers of the event are Odessa St Ilya Monastery, the International Institute of the Athonite Legacy and “Christian Odessa” Museum.

The plenary session began with the customary greetings received from eminent archpastors. The first was from His Beatitude Metropolitan Onouphry, Primate of the Ukrainian Orthodox Church, who noted that by studying the importance of the Athonite tradition of Hesychasm and theology in the history of Ukraine, the forum participants are not simply touching upon some theoretical questions, but strive to “recognize and understand the depth and active living tradition of monastic asceticism as being constantly in the presence of God and perpetually praying, which makes monasticism the true ‘salt of the earth,’ defending our world from decay and death.” The Primate of the Ukrainian Church expressed hope that “all who study and analyze this remarkable and blessed theme will not only enrich our knowledge, but become another important milestone on the path of our spiritual perfection and experienced contact with the grace-filled power of prayer.”

In his message, His Eminence Metropolitan Savva of Warsaw and All Poland stressed the importance of prayer, and, consequently, the significance of the forum’s dedication to the Athonite traditions. “Prayer, which unites all ascetics, serves as a consolation for many, and the means of resolving earthly problems. Especially today, in this era of spiritual dissolution, both the individual believer and contemporary society need it,” he wrote.

The First Hierarch of the Russian Orthodox Church Outside of Russia, His Eminence Metropolitan Hilarion of Eastern America and New York, in his letter, pointed to the bond between Odessa and Mt Athos, wishing for the participants of the conference “bolstered inner strength… and that God grant His many mercies for the worthy carrying out of service to God and mankind in today’s difficult times,” and also expressed support for His Beatitude Metropolitan Onouphry and the Ukrainian Orthodox Church as the sole canonical Church in Ukraine.

The Exarch of the Most-Holy Sepulcher of the Lord in Cypress, His Eminence Metropolitan Timotheos also sent greetings, pointing out the bonds between Ukraine and the Holy Land, especially as Odessa was the “portal of the sea” for pilgrims of the Russian Empire going to the Holy Land. He also recalled the influence of Palestinian monasticism on the monastic traditions of the Holy Mountain of Athos, in particular the Lavra of Savva the Sanctified.

The Chancellor of the UOC, His Eminence Metropolitan Antony of Borispol and Brovarsk pointed out the achievements of the Kievan monk who spent more than 30 years on Mt Athos, St Gabriel of Athos. He stressed that the theme of this conference is very important for the spiritual rebirth of the Ukrainian people and that the historic ties between the Holy Mountain and other centers of world Orthodoxy must be studied and renewed.

His Eminence Metropolitan Agafangel of Odessa and Izmailsk noted the importance of researching the historic and spiritual connections between Odessa and Athos. “I wish you all Divine mercies, thanks to which we obtain the possibility not only to analyze the various sides and phases of the influence of the tradition of hesychastical prayer in the formation of our most rich Ukrainian culture, but, what is most important, to apply this wealth to spiritual life which is being discussed at this conference,” said Vladyka Agafangel.

The first part of the forum concluded with the presentation of a book by SV Shumilo: “Elder Anikita: the Spiritual Path of Holiness. Materials to the Life of Hieroschemamonk Anikita (Prince Shirinsky-Shikhmatov).”

The second part of the plenary session was opened by His Grace Bishop Viktor of Artzizsk, who spoke on “Teachings of the Essence and Aims of Monastic Podvig in the Works of Metropolitan Agafangel of Odessa and Izmailsk.”

Protopriest Stephan Pruzhinsky then spoke on “Biblical and Patristic Teachings on Gifts and Revelations of Divine Grace in Human Life.”

Protopriest Serafim Gan, Chancellor of the Synod of Bishops of ROCOR, then read his speech “On the Efforts of Bishop Laurus (Shkurla) to Preserve St Elias Skete on Mt Athos in the Latter Years of Archimandrite Nikolai (Piven).”

The forum continued in five sections:

“The Athonite Influence on Literature, Literary Tradition, Theology and Art”

“The Works, Teachings and Legacy of St Paisius Velichkovsky”

Participating in person and via correspondence were scholars and theologians from Ukraine, Great Britain, Germany, Greece, Italy, Moldova, Poland, Russia, Slovakia, the USA and France.