More than 50,000 people worshipped Gifts of Magi in Russia’s Volgograd

More than 50,000 people have so far worshipped the Gifts of the Magi – a Christian relic taken out of Greece for the first time since the 15th century – in the Cathedral of Our Lady of Kazan in the southern Russian city of Volgograd. 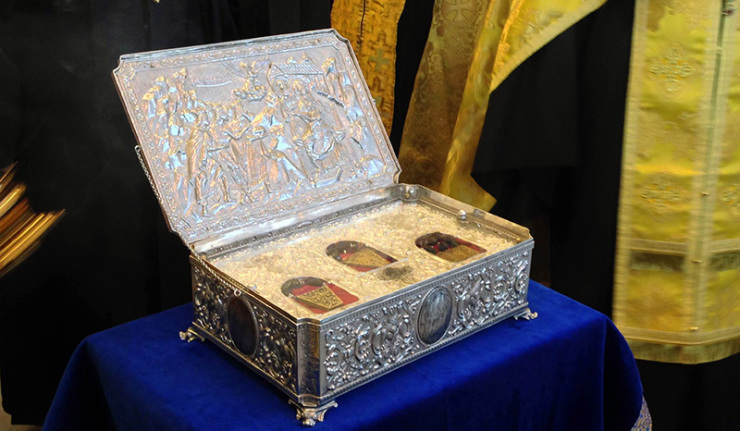 “The box with the relic will be open for visitors until 10 a.m. Moscow Time February 5, not until midnight February 4,” Sergei Ivanov, a spokesman for the regional diocese, said Tuesday.

“On Wednesday morning, the relic will be taken from Volgograd’s Cathedral of Our Lady of Kazan to the airport and then it will head for home, to the the Agiou Pavlou (St. Paul’s) monastery on Mount Athos,” Ivanov told Itar-Tass.

According to the Gospel of Matthew, Biblical Magi, or Wise Men, were led by the Star of Bethlehem to the place where the baby Jesus was born. They brought Christ gold, which was a gift to kings, frankincense, a sign of veneration, and myrrh, used to anoint the deceased, thus venerating Jesus as King, God and Man.

Warming centers and feeding stations have been opened for believers, with temperatures in the city reaching minus 20 degrees Celsius.

The relic was brought to Volgograd on Monday. The event is important for the city, where two suicide bombings killed 34 people and injured more than 70 others in attacks on a railway terminal and a trolleybus on December 29 and 30, 2013.

The Gifts, kept in the Agiou Pavlou monastery on Mount Athos in Greece since the 15th century, were displayed in Russia on January 7-17, then traveled to Belarus, and were later taken to Ukraine for display in the world-famous Kiev-Pechersk Lavra, or Monastery of the Caves, in Kiev. Over 1.6 million of pilgrims have worshipped the relic in the three countries by now.

The box with the relic has part of the original Gifts: three gold plates with a thin filigree ornament with beads from a mix of frankincense and myrrh attached to it on a silver thread.

Volgograd was a special point in the Gifts’ travel from Greece due to the recent terrorist attacks on the city, Konstantin Malofeyev, the head of the St. Basil the Great Charitable Foundation, which organized and funded the Gifts’ travel to Russia, Belarus and Ukraine, said at an Itar-Tass news conference.

“There was a permit to take the relic [out of Greece] for one month, but it was impossible to say no to believers in Volgograd. The Gifts of the Magi were brought here by Patriarch Kirill [of Moscow and All Russia] himself, who arrived in Volgograd to speak to those who came through the tragedy and tell them words of consolation,” Malofeyev said.

Representatives of the Russian Orthodox Church have said the Gifts of the Magi are one of the few relics connected with the earthly life of Jesus Christ that have been preserved to the present day.

Legend has it that shortly before her Dormition, or Assumption, the Mother of God passed the relics to two pious women. Later on, the Gifts were brought to Byzantium, and, after the Turkish conquest of Constantinople in 1453, they were taken to Mount Athos in Greece by Serb Princess Mary.