Source: OCA
Natalya Mihailova | 28 March 2016
Clergy, faculty, students and administrative team members at Saint Tikhon’s Seminary here recently marked the 60th Anniversary of the repose of Saint Nikolai [Velimirovic] with the celebration of an Akathistos Hymn outside the room in which he had fallen asleep in the Lord on March 18, 1956. 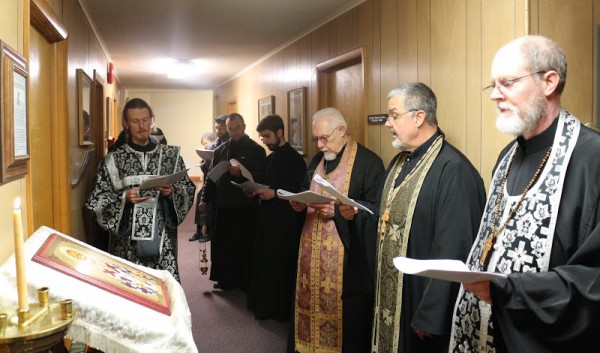 “Saint Nikolai of Zhicha, known internationally for his numerous theological and spiritual writings, including the Prologue from Ohrid, The Life of Saint Sava, and A Treasury of Serbian Spirituality, spent the last five years of his life here at Saint Tikhon’s, where he taught classes, mentored seminarians, and served as the seminary’s Dean and Rector,” said Archpriest Dr. Steven Voytovich, STOTS Dean, who presided at the celebration. “A commemorative photo and short biography hang in the hallway outside his former room, serving as a daily reminder of his presence and protection.”

According to the account of Saint Nikolai’s life, he also had served as a guest lecturer at Saint Vladimir’s Seminary, at that time located in New York, NY, and Holy Trinity Monastery and Seminary, Jordanville, NY.

“The Akathistos Hymn, composed on Pascha 1923 by Saint Nikolai, who at the time was Bishop of Ohrid, is dedicated to Jesus, the Conqueror of Death,” Father Steven explained. “One of the prayers from his earlier composition, Prayers by the Lake, focusing on Jesus as King and God, was read at the conclusion before the singing of the Magnification and the veneration of his relics and icon.”

Concelebrating with Father Steven and Archpriest Stephen Kopestonsky were Priest David Gresham and Deacon Basil Ferguson, both students at STOTS.

“We take this opportunity today to prayerfully remember one of our saints who had walked on these grounds, and ask his intercession before Christ our Lord for our ongoing efforts toward pastoral formation, for the faculty, the seminarians, and all who continue to labor here,” Father Steven said at the conclusion of the celebration. “O Venerable Father Hierarch Nikolai, pray unto God for us!”

An interesting monograph on the life of Saint Nikolai, originally published in the 1986 edition of the Tikhonaire, may be accessed on the STOTS web site.