About 7,000 people gathered at Moscow’s Cathedral of Christ the Saviour for Easter service 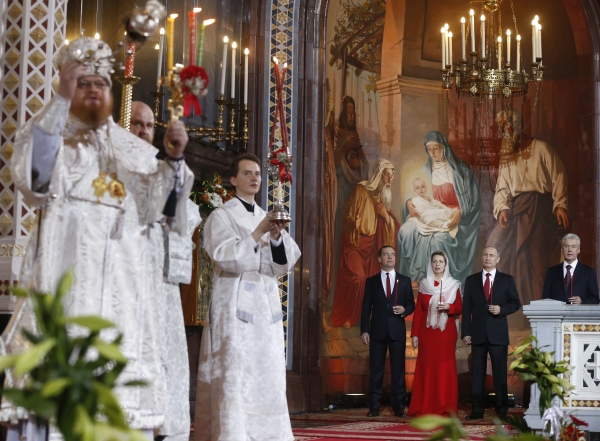 Many people came with children. Free invitations to the Easter service had been distributed via Moscow churches. Preferences had been given to families with many children as well as old people, invalids and children from orphanages.

A delegation of the Foundation of St. Andrew the First Called delivered Jerusalem’s Holy Fire to the cathedral from Moscow’s Vnukovo airport.

Patriarch of Moscow and All Russia Kirill, who conducted the Easter service, put fire to the candles in the cathedral, while the participants in the procession of the Cross and the worshippers lit their lamps from the burning candles.

In his speech to the worshippers, Patriarch Kirill said that the joy of the Easter celebrations became stronger with the arrival of Jerusalem’s Fire of the Holy Sepulcher in Moscow.

“By the long-standing tradition, the Holy Fire has been put on the candles and lamps in the Cathedral (of Christ the Saviour) which are later taken to all parts of Russia, to the territory of entire historical Rus. The holy fire is then lit in thousands and thousands of churches and homes as a symbol of divine presence in our life and as a symbol of the invincible faith,” the patriarch explained.

“Let us accept this divine gift and take it benevolently to our homes,” Patriarch Kirill told the worshippers.

For many centuries, the Fire has been coming down from Heaven to the Church of Holy Sepulcher in Jerusalem. In 2003, the Foundation of St. Andrew the First Called decided to restore the tradition of taking a particle of Jerusalem’s Holy Fire to Russia as the pilgrims of the past centuries used to do.

Particles of the Holy Fire have been delivered from Moscow to hundreds of Orthodox Christian churches, including Simferopol, the capital of Crimea, as well as to Tallinn (Estonia) and Rome abroad.

Patriarch of Moscow and All Russia Kirill exchanged triple kisses with Vladimir Putin, Dmitry Medvedev and his wife Svetlana, as well as Sergei Sobyanin and gave them decorative Easter eggs as gifts.

The Russian leaders also extended their Easter greetings to the patriarch who will conduct the great Easter vespers at the Christ the Saviour’s Cathedral at 16:00 on Sunday.