Source: DECR
Natalya Mihailova | 26 May 2015
On May 22, 2015, the Feast of the Translation of the Relics of St. Nicholas from Myra to Bari, the Russian Orthodox parish in Teheran celebrated the 70th anniversary of St. Nicolas’s Cathedral. 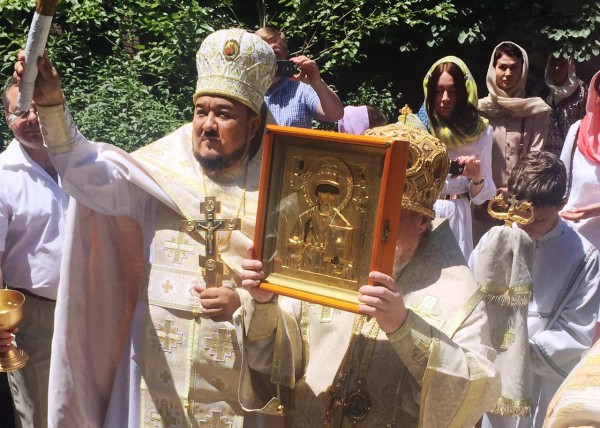 With the blessing of His Holiness Patriarch Kirill of Moscow and All Russia, the festive liturgy was celebrated by Archbishop Alexander of Baku and Azerbaijan. He was assisted by Archimandrite Alexander (Zarkeshev), rector of St. Nicholas’s, and clergy of the diocese of Baku, the Moscow Patriarchate Office for Institutions Abroad has reported.

During the requiem service, the congregation prayed for the repose of the souls of those who built the church – Archimandrite Vitaly (Sergiev), Archimandrite Vladimir (Malyshev) and architect Nikolay Markov.

Among the congregation were Russian charge d’affaires in Iran A. Yudentzov and Belarus’s Ambassador to Iran V. Rybak. There were also pilgrims from the Russian Orthodox church of St. Philip in United Arab Emirates.

After the liturgy the congregation marched in a procession with the cross around the church and held a thanksgiving service.

After the canonical ‘May Years…’ on the solea of St. Nicholas’s, Archbishop Alexander congratulated the rector, warden and parishioners on the remarkable date and stressed that this year marks the 20thanniversary of the parish’s return to the fold of the Mother Church and the appointment of Father Alexander (Zarkeshev) as rector of the church in Teheran.

In his response, Archimandrite Alexander thanked His Eminence for attention and love for St. Nicholas’s.

Then the whole congregation moved to the refectory hall in which they were offered festive food organized through the efforts of the warden Emmanuel Shirani.

After the Soviet diplomats closed the two embassy churches in Teheran in 1921, the Russian community arranged a chapel in Aromane Street, where the last missionary of the Russian Orthodox Mission in Urmia, Archimandrite Vitaly (Sergiev) served.

In 1941, there arrived in the Iranian capital Hieromonk (later Archimandrite) Vladimir (Malyshev). Trough his efforts, considerable funds were raised and a plot of land was bought across from the US Embassy in Teheran.

In August 1944, the foundation of the church was laid. It was designed by the architect Nikolay Markov. In April 1945, St. Nicholas’s was consecrated.

Serving at the parish were clergy of the Russian Church Abroad, but by the early 80s the parish was left without a priest. In the early 1995, the parishioners appealed to the late Patriarch Alexy II of Moscow and All Russia to accept the parish back in the fold of the Mother Church.

In February 1995, the Holy Synod resolved that the parish be accepted in the jurisdiction of the Moscow Patriarchate and that Hieromonk Alexander (Zarkeshev) be appointed rector of St. Nicholas’s in Teheran.

Most viewed articles
A Great Time to Join the Orthodox Church220
New Jersey Governor Signs Bill Legalizing Abortion Up To Moment of Birth93
The Way of Christ Is The Way of Love76
Brooklyn Street Co-Named for Antiochian Pastor Who Served a Half Century There61
Metropolitan Hilarion: the Church and traditional confessions have done everything possible to improve the situation in Kazakhstan53
First Church in the Antiochian Archdiocese Named for St. Xenia of St. Petersburg Prepares for Feast Day48
Metropolitan Hilarion Celebrates the 20th Anniversary of His Episcopal Consecration45
My World’s Different44
Patriarch Porfirije of the Serbia: Our Position on the Church Issue in Ukraine Has Not Changed13
1
Most popular authors
Frederica Matthewes-Green220
Pravmir.com team159
Ryan Foley93
Fr. Theodore Stylianopoulos76
Peter Samore61
Protopresbyter Themistoklis Mourtzanos44