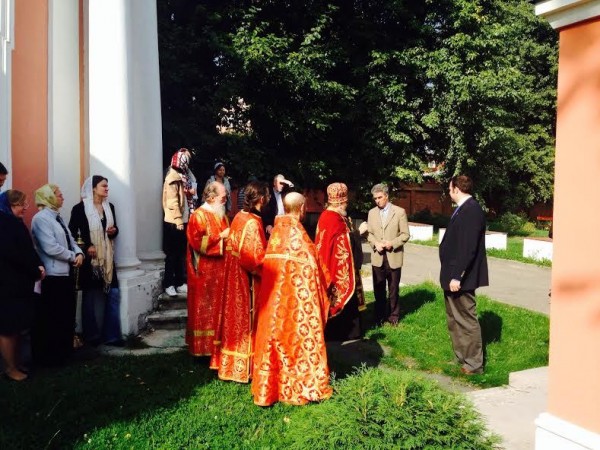 As Archpriest John Jillions, Chancellor of the Orthodox Church in America, writes in his “Chancellor’s Diary” entry for today, “May God grant eternal rest and memory eternal to all who died in the attacks on 9/11. And may He comfort the families and friends who mourn their loss.”

In April 2009, the annual 9/11 observance became known as the “National Day of Service and Rememberance,” inspired by the remarkable spirit of unity, compassion and service that arose immediately following the attacks.  The day is now the nation’s largest day of charitable outreach activities.  [See related story.]

Above all, the day remains one of prayer and reflection.  And indeed, there is much upon which one might reflect on this day—the spreading conflicts and sorrows being experienced across the globe, especially across the Middle East as new threats have emerged and continue to emerge; discerning appropriate responses thereto in an ever-changing political landscape; the suffering of countless Christians who continue to abandon their homes, literally fleeing for their lives; the challenge to maintain focus on “our true home,” the Kingdom of God, wondrously in our midst yet all-too-often overshadowed by this fallen world; and ultimately, the need to acknowledge that great gift of repentance, the very heart of the Gospel, to which all mankind has been called to embrace in faith and love.

At the very heart of the comfort about which Father John speaks stands prayer.  We pray for those who lost their lives in the 9/11 attacks, as well as for their families and friends who continue to mourn the loss of those with whom, just one day earlier, they had walked and talked; for those who so selflessly reached out to victims and survivors alike on that tragic day; for those brave first responders—fire fighters and physicians, police and military personnel and officials, clergy and counselors and coworkers—who risked their “all” to bring comfort and hope to friend and stranger alike; and for everyone still struggling to “make sense” of that which, by nature, is senseless.

Prayers are also being offered on this day—and will continue to be offered this weekend—in many of our parish churches.  For example, at Saint Luke the Evangelist parish, Palos Hills, IL, the day is being marked with the celebration of the Divine Liturgy and an evening service and program of remembrance that is open to the public.  At the OCA’s Saint Catherine the Great Martyr Representation Church in Moscow, a Memorial Litiya was celebrated after this morning’s Divine Liturgy marking the Feast of the Beheading of Saint John the Baptist as commemorated on the Julian Calendar.  Representatives of Moscow’s Protestant and Catholic communities, together with a representative of the Canadian Embassy, were present as the church bells were tolled by Americans, Canadians and Russians.

Among those who lost their lives on 9/11 and for whom we pray on this day are two dozen Orthodox Christians, a list of whom has been compiled and maintained over the years.  While the list may not be complete—if readers know of anyone whose name should be added to the list, please send it to info@oca.org —our Lord assures us that our prayers, even for those whose names have been forgotten or who are known to Him alone, will not go unanswered.