Source: Pravmir.ru
The percentage of those who understand the dogma increases slightly with age: 3% of citizens under 45 and 6% among Russians over 60.
Natalya Mihailova | 11 June 2014
PRAVMIR. Only 4% of Russian citizens claim to know the dogma of the Holy Trinity. 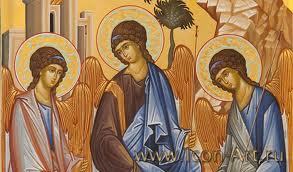 More than average, the doctrine of the Holy Trinity Orthodox is known by Russian Orthodox faithful—one in ten (9%). These results were shown by a survey conducted by the Research Service “Environment.”

The percentage of those who understand the dogma increases slightly with age: 3% of citizens under 45 and 6% among Russians over 60.

According to the survey, the geographical factor has a significant impact on the knowledge of the dogma. Among residents of cities whose population is more than 1 million, 15% know the dogma, as compared to 0% of residents in towns and villages. And if in the Central Federal District every tenth respondent (10%) knows the dogma, then in the Siberian District, the chance of finding someone who knows the dogma of the Holy Trinity is zero (0%).

1500 people participated in the survey.