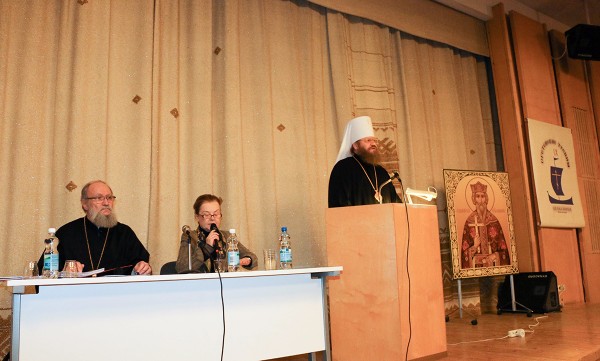 Towards the Millennium of the Demise of the Baptizer of Rus’ concluded their work. The readings were organized by Archpriest Victor Lyutik, dean the Moscow Patriarchate parishes in Sweden and rector of the church of the Protecting Veil in Helsinki, together with the Russian Science and Culture Center in Finland.

With the blessing of His Holiness Patriarch Kirill of Moscow and All Russia, the conference was chaired by Metropolitan Feodosy of Tambov and Rasskazovo.

The 9th Sretensky Readings were attended by representatives of the Helsinki diocese of the Finnish Autonomous Orthodox Church, clergy and parishioners of the Parish of the Protecting Veil in Helsinki, St Petersburg metropolia of the Moscow Patriarchate, Russian Orthodox parishes in Sweden, Norway and Iceland, as well as srepresentatives of compatriots’ associations in Belgium, Great Britain, Hungary, Germany, Greece, Ireland, Netherlands, Norway, Switzerland and other countries. Among the participants were Metropolitan Augustine of Helsinki (Finnish Autonomous Orthodox Church), Bishop Seppo Haakkinen of the diocese of Mikkeli, Russian embassy counsellor V. Avtsinov, as well as scholars from St Petersburg Theological Academy, University of Helsinki and several Russian and European universities.

The conference began with the Divine Liturgy celebrated by Metropolitan Feodosy at the Cathedral of the Assumption (Finnish Autonomous Orthodox Church).

Metropolitan Feodosy opened the Sretensky Reading with a paper on ‘The Holy Prince Vladimir Equal-to-the-Apostles in the Family of Monarch Baptizers of Christian Nations’, the Tambov dioceses press service reports. During plenary session, papers were read devoted to historical and theological aspects of the Baptizer of Rus’s enlightening ministry.