Source: Al Bawaba
Natalya Mihailova | 15 July 2015
The Syrian civil war has been raging for four years and counting, so for some residents weddings may be the last thing on their minds. 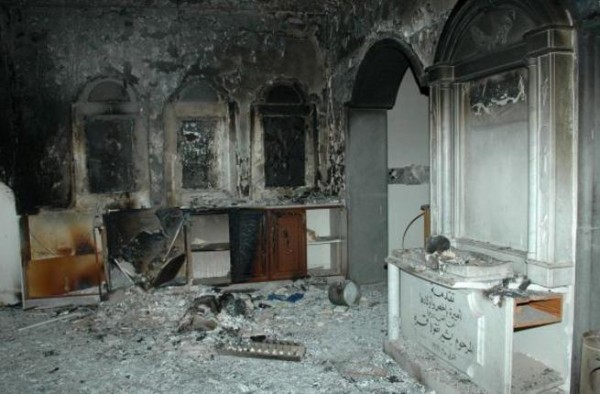 A picture taken on May 9, 2014 shows the damage inside Um al-Zinar church in the Christian Hamidiyah neighborhood of Syria's central city of Homs. (AFP/File)

But the conflict didn’t stop one couple in the western city of Homs from getting married in a church — or at least what’s left of it.

Photos of the young pair’s wedding were published Tuesday on Twitter, showing they didn’t need a roof to tie the knot. The ceremony became a silver lining in a city of ruins.

A Greek Orthodox bishop told Reuters in May 2014 that 11 churches in Homs had been destroyed. One of them was the Saint George Church, located in the Old City’s Christian neighborhood of Hamidiyah.

Photos show the church building was turned to rubble, allegedly from regime airstrikes and artillery. Government-controlled Homs had been referred to as the “capital” of the revolt until regime forces reclaimed the city last year.

With no roof and no building structure, all that’s left is the foundation. But that seemed to be enough for the newlyweds, whose wedding photos were uploaded on social media and celebrated as a symbol of strength.