A New Chapter for the Cultural and Tourist Development of St. Catherine’s Monastery in Sinai 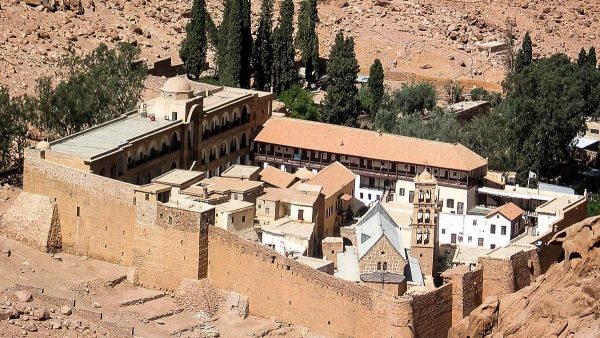 The Egyptian government gave the green light for the expansion of St. Catherine International Airport in Sinai. The project, to be completed in less than two years, will upgrade the entire area, including the Greek-Orthodox Saint Catherine’s Monastery.

The project, backed by the governor of South Sinai, General Khaled Fouda, has already been approved by the relevant ministries, and is expected to cost about € 60 million, Romfea reports.

An ad hoc expert group visited yesterday the site and decided on the immediate implementation of the project, which will ratify a fresh start in the cultural and tourist development of the area, giving access to tourists and visitors from all over the world to the God-Trodden Mount Sinai of Saint Catherine.

It should be noted that, according to his earlier statements, Archbishop Damianos of Sinai, Faran and Raitho has already come out quite clearly in favour of this constructive project for the region.

The expansion project for Saint Catherine’s Airport is expected to be completed in about 18 months.

Most viewed articles
Faith and Moral Freedom80
Patriarch Kirill: “The Memory of the New Martyrs will Help Us to Be Faithful to Christ amid Modern Temptations”80
The Trap of Religiosity79
Bishop Nicholas of Manhattan visits Holy Cross Monastery in West Virginia74
Lord, Save Me!65
Patronal Feast Celebrated in St. Anna Convent in Vashkivtsi43
Condolences of Patriarch Kirill over the death of believers in the fire that broke out in Abu-Seifein Church in Cairo36
25 Years of Help: the Ship-Church Goes On its 25th Voyage to Distant Villages24
St. Tikhon Church to host Liturgical Music Symposium in October 202224
Most popular authors
Pravmir.com team281
Archpriest Michael Gillis80
Vasileios Stoyiannos79
Fr. Theodore Stylianopoulos65