Source: Basilica.ro
The Bulgarian Orthodox Church is preparing to celebrate the 800th anniversary of the rock-hewn churches in Ivanovo, in the north-central Ruse Province, this year and next.
Mihail Mere-Albe | 17 January 2020 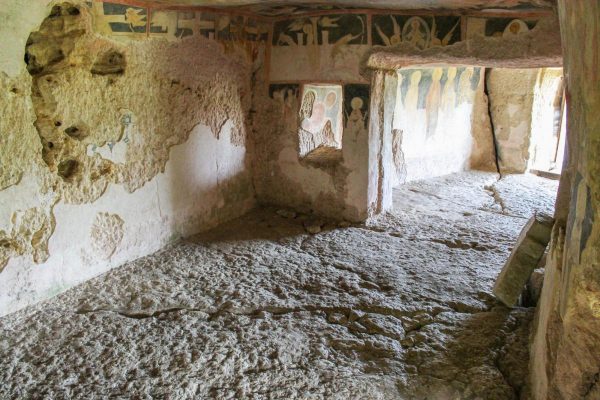 His Eminence Metropolitan Naum of Ruse met with the Governor and Deputy Governor of the Ruse Province recently to discuss preparations for the upcoming celebrations.

The program provides for festive initiatives and services both in 2020 and 2021. Among the events included are an academic conference on the history and spirituality of the holy monastery, as well as solemn molebens on the more important dates and Church feasts associated with it.

The idea is to promote one of the most significant sites of medieval ecclesiastical and cultural heritage in Bulgaria under the protection of UNESCO. The rock-hewn churches of Ivanovo were included in the UNESCO World Heritage List in 1979.

The caves in the region were inhabited by monks from the 1220s, when the monastery was founded by the future Patriarch Joachim I of Bulgaria, until the 17th century. Cells, churches, and chapels were hewn out of solid rock, forming a completely unique monastery complex for Bulgaria. At its peak, there were around 40 churches, and another 300 rooms, most of which have not survived until today.

The monastery enjoyed a number of royal patrons throughout its history.

It was a center of hesychasm for the Bulgarian Church and is known for its 13th and 14th century frescoes preserved in five churches, considered beautiful examples of Bulgarian medieval art.

Measures are also being considered to improve infrastructure and access to all rock churches found in the area. The possibility that other rock churches will also be included in the World Cultural and Natural Heritage List was also discussed.

Most viewed articles
First Church in the Antiochian Archdiocese Named for St. Xenia of St. Petersburg Prepares for Feast Day258
Patriarch Kirill: Not Only People, But Churches Too, Can Depart from God208
A Christianity of the Catacombs166
Thoughts on Theophany and Revelation98
Patriarch Porfirije of the Serbia: Our Position on the Church Issue in Ukraine Has Not Changed86
Archbishop Makarios of Australia: ” the Great privilege of the Orthodox Church is that we live in communion”63
The Truth About Riches59
Metropolitan Onuphry Speaks on How to Protect One’s Soul From Sin22
How to live the Spiritual Life (Part I)1
Most popular authors
Pravmir.com team637
Archpriest Lawrence Farley166
Elissa Bjeletich98
Fr. Gabriel Bilas59