Source: DECR
Natalya Mihailova | 01 March 2016
On February 25, the Russian General Consulate in New York gave an official reception on behalf of Consul General I. Golubovsky and Bishop Ioann of Naro-Fominsk, administrator of the Patriarchal Parishes in the USA, for presenting a postmark issued by Gosznak, Russian Federal State Unitary Enterprise, to mark the 150th birthday of St. Tikhon, Patriarch of Moscow and All Russia. 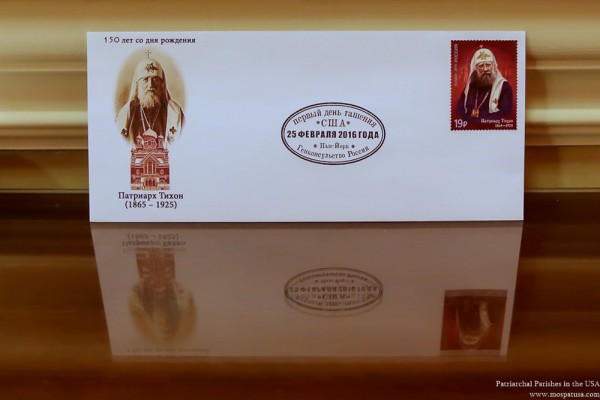 The reception was attended by clergy of the Moscow Patriarchate, Russian Church Outside Russia and Orthodox Church in America, as well as Russian Foreign Minister Deputy G. Gatilov, diplomats and representatives of public and cultural organizations in the USA.

In their speeches, Mr. Golubovsky and Bishop Ioann noted the importance of St. Tikhon’s work for the Russian Church in the United States and in Russia. The president of the Foundation for Preserving the Cultural Heritage of the Russian America “Northern Cross”, Mr. Yu. Sandulov, who initiated and coordinated the project, spoked about the commemorative postmark issued in 5 thousand copies and about the final stage in the work with the New York authorities to name a part of the 97th Street in Manhattan, in which St. Nicholas’s built by the saint is located, after Patriarch Tikhon.

After that the postmark cancellation ceremony took place. The postmark was stamped on a special envelop with an image of the St. Nicholas Patriarchal Cathedral, the website of the Patriarchal Parishes in the USA reports.