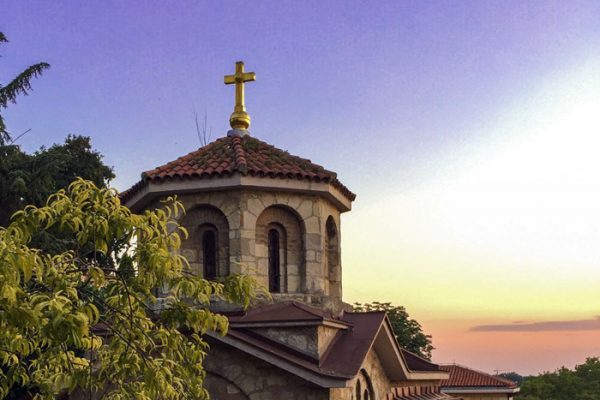 A number of years ago I was chatting with a co-worker at my secular job and she asked me to what church I belonged. When I answered, “the Orthodox Church”, she responded, “Oh, that church is so retro”. She was a sweet lady, and offered her comment as a simple observation, not a criticism. Though I smiled back and said, “Thank you. We try”, I was aware that her comment was also not offered as a compliment. Churches are not supposed to be retro. They are supposed to be modern and up to date. They are (in a saying that itself is now a little retro) supposed to move with the times.

This ecclesiastical determination to be modern and to move with the times seems to date from the 60s and 70s. In those far off days church leaders did a fair bit of hand-wringing over the lack of young people attending their services, and were determined to remedy the lack. They felt sure that the church’s problem was that it was no longer relevant to the concerns of the young people, and that if only the church could change to become relevant, all would be well. The church had to move with the times if it was to survive. It had to avoid appearing retro at all costs. Doctrines deemed offensive were quietly dropped. Hymns were rewritten, as were creeds.

The results were not uniformly wonderful. One hymn exulted in a “God of concrete, God of steel, God of piston and of wheel”, while another (entitled “Sing We a Song of High Revolt”) called us to “revolt and fight”, and (with dubious rhyming poetry) to “live and sing Magnificat in crowded street and walk-up flat”. One denomination created a new creed in 1968 which began with the words, “Man is not alone; he lives in God’s world”, only to have to revise it yet again when it became politically incorrect not to use inclusive language. No matter. It was felt that once the church had shed its retro image and had become Relevant (with a capital “R”), multitudes of youth would be hooked and would return to fill the pews to overflowing. The church changed, but the young people still didn’t return. What was the problem? Were we still too retro and traditional? Would guitars help?

I suggest that what we need for our salvation is a church that remains retro. That is, we need a church which refuses to move with the times, largely because it is the times that are often the problem. Every age or epoch has its own strengths and insights. It also has its own weaknesses and blind spots. We need a church which is timeless and can offer the same saving truths in every age and epoch.

Take, for example, Germany in the 1930s. The problem there was precisely the times. Many people in Germany moved with the times and embraced what was currently popular and relevant, and nothing then was more relevant than National Socialism. Accordingly, large segments of the Protestant church moved with the times and embraced the tenets of National Socialism. Some people (like Dietrich Bonhoeffer) refused to do so, and held to the retro doctrines that many Protestants had abandoned, but Bonhoeffer was something of an exception. What was needed in Germany in that day was a church which refused to move with the times.

The problem was not unique to Germany or the 1930s. Each epoch offers its own challenges and proffers its own lies and distortions. While we are in the midst of it all, the lies and distortions seem self-evident. We need something to tell us that what seems self-evident may still be wrong. We don’t need a church to tell us what we already know, or to solemnly intone that “honesty is the best policy” or that “a stitch in time saves nine”. We can figure that out by ourselves. We don’t need a church in 2019 to tell us that genocide is wrong, because most people already know that. We do need a church which will tell us that abortion is wrong, because many people do not know that. A church which has moved with the times and can only echo what society around it says is useless and worse than useless. In the words of Christ, it is like salt that has lost its savour, and is fit only to be thrown out and trampled under the foot of men (Matthew 5:13).

It is no doubt because of its uselessness that churches which have moved with the times have not grown or experienced the triumphant return of its young people. Secular young people are probably happy to see their own secularism reflected in the churches, assuming that they ever think about the church at all. But they see no reason why they should get out of bed on Sunday morning to go and worship there. The church pews therefore remain empty, and are getting emptier still. And, when you think about it, the young people do have a point. Why go to church where they pass the plate when you can get the same thing at home for free?

There is only one reason to go to church, and that is because you can get something there which is available nowhere else. The truth and life that are available in the one, holy, catholic, and apostolic church are not available elsewhere. Only in that church will we find a voice that contradicts the world when the world badly needs contradicting. That is what people need in every age—someone to tell them truths they would not otherwise know, not truths they could figure out for themselves unaided.

Today we need the church to be retro enough to withstand the incoming flood, and its leaders to fearlessly proclaim its timeless teaching regardless of the cost. We need such saints as Athanasius, who stood against the flood in his own day. In the words of C.S. Lewis, “It is his glory that he did not move with the times; it is his reward that he now remains when those times, as all times do, have moved away.” St. Athanasius the Great was great because he was retro in his own day. God grant us to be similarly retro in ours.

If one wants to grow and mature in Christ, as well as adhering faithfully to one’s daily rule…

Recently I read an article on 1 Peter 3:1-7, which passage contained advice to Christian women married to…

How Involved Should the Church Be in Politics?

This last Monday Canada had (or rather “endured”) another federal election. It was called in the midst of…

Most viewed articles
Hallowed Be Your Name: Some Grammar and A Reflection226
Church Dating 1,600 Years Back Discovered in Turkey’s Priene Ancient City151
How to Read the Bible119
Seven-day celebrations dedicated to the Saint who helped Bucharest during plague epidemic begin on Thursday91
Holy Intercession Church in Glen Cove, NY, Celebrates its 70th Anniversary78
Patriarch Kirill Encourages the Media to Report Proper and Adequate Information about the Church75
Since the Start of the Pandemic Moscow Priests Have Made Over 4,000 Visits to Patients with COVID-1952
Words from St. Isaac of Syria37
Archbishop Peter of Chicago and Mid-America in an interview to Poltava Diocese’s press service reveals interesting moments in the life of St John (Maximovich)16
Most popular authors
Archpriest Michael Gillis225
Pravmir.com team220
Dilan Pamuk151
Archpriest Lawrence Farley119
Aurelian Iftimiu91
Archpriest Stephen Freeman36